Will Israel Adesanya Complete His Style-Bending Title Run at UFC 236? Kelvin Gastelum May Take Issue with That 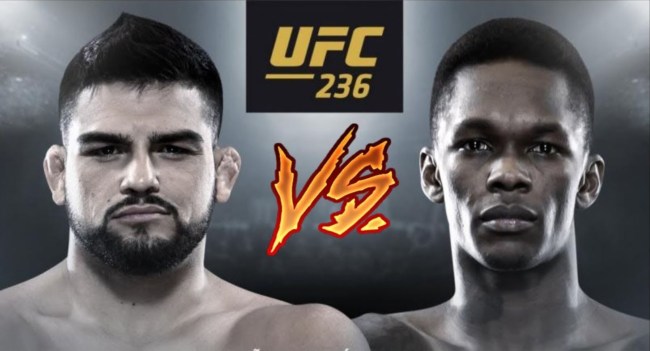 Let’s not beat around the bush here. UFC middleweight Israel Adesanya is one of those once-in-a-generation supernovas that takes an entire subculture by storm. Graceful as a gazelle, he’s lethal as a jaguar, and this Saturday, Adesanya looks to capture his first UFC title when he squares off against Kelvin Gastelum in the UFC 236 co-main event. Sure, it’s one of those interim belts that Adesanya and Gastelum are fighting for, but forget the technicalities.

If Israel Adesanya wins the title on April 13, he will have completed one of the most impressive runs to ever start a UFC career, so perhaps it’s a good time to fire up that new ESPN+ app and the Pay Per View card, you know, if you’re into aesthetically pleasing fights, precision punches, creative kicks, and all around contortionism.

A Style All His Own

A native of Lagos, Nigeria, Adesanya, who’s colloquially known as “The Last Stylebender,” immigrated to New Zealand with his family as a teenager. It was in Oceania where he first developed a passion for kickboxing and Muay Thai, but fast forward a few years, and Israel relocated to China, of all places, to launch his professional fighting career.

It’s actually not such a bizarre idea when you think about it. There were like a billion dudes for Adesanya to beat up on in the Middle Kingdom, and plenty of shady promoters willing to fork over local public funds to watch a good old ass whoopin’ in the local town hall. Regardless, the years in China helped Adesanya develop a martial arts skill set that is closer to a video game character than an actual human, and in the process, his reputation made it to the US, where even greats like UFC heavyweight champion Daniel Cormier brought Israel into the training room to mimic Jon Jones during fight camp.

The comparison to Jones is not completely undeserved, but Israel Adesanya has a style all his own. And besides, everyone knows he’s more akin to the second coming of Anderson Silva. The two even went head-to-head this past February, with Adesanya beating his idol in a Fight of the Night performance.

With all the talk of Adesanya and his historic run through the UFC ranks — this will be his sixth fight in 14 months since first stepping foot inside the Octagon — many believe it’s a foregone conclusion that he’ll take the belt back to New Zealand and set up a unification bout against undisputed middleweight champion Robert Whittaker, but slow your roll fanboys, if not, challenger Kelvin Gastelum will make sure you stay in your lane.

Buried in the UFC 236 storylines is the fact that Kelvin Gastelum was actually booked to fight for the undisputed middleweight title in February before champion Whittaker was scratched from the card just hours before the bout due to a severe hernia. Essentially demoted and then placed in an interim title fight, Gastelum is, in fact, the more experienced MMA fighter in Saturday’s co-main event.

Saturday, April 13, also coincidentally happens to be the sixth anniversary of Gastelum’s coronation as the winner of The Ultimate Fighter, season 17. Seems like not much has changed since 2013, because no one expected Gastelum, the youngest champion in the history of the long-running reality TV show, to win any of those fights either. Now he’s just a big left hand away from joining the likes of Forrest Griffin, Rashad Evans, Michael Bisping, and Matt Serra as TUF alums to go on to win a UFC title.

Can @KelvinGastelum top it in Saturday's co-main event?! #UFC236 pic.twitter.com/3ItLERoFtk

Once the butt of many a botched weight cut joke and jab, Gastelum was literally forced out of the welterweight division and sent up to 185 pounds as a punishment of sorts. UFC matchmakers actually did him a serious solid though, as Gastelum’s been stellar as a middleweight, essentially retiring Bisping and Tim Kennedy. He also crushed Vitor Belfort back in 2017, but lost out on the win and performance bonus after pissing hot for smoking the reefer.

Still, he only lost once as a middleweight, and Gastelum has not only demonstrated that his power translates up a division, but also that his speed makes up for any perceived size disadvantage.

Considering mixed martial arts is an art form all its own, a dance, if you will, albeit a dance with punches and kicks, and a whole lot of blood and choking, it’s tough not to become hypnotized by Adesanya’s style and creativity. He’s one of those overnight sensations, years in the making, that every promoter wants to get behind. But don’t sleep on Gastelum, who’s never been knocked out during his entire MMA career. Dude is a legit threat to derail the hypetrain. Or is he?

I guess you’ll just need to sign up for ESPN+ to find out. Oh, and they’re basically giving away the UFC 236 Pay Per View for free if you pony up for a yearlong subscription. It’s not a bad deal considering ESPN+ also includes: