The UFC 238 People’s Main Event: Tony Ferguson Vs. Donald Cerrone Is Truly A Fight Like None Other 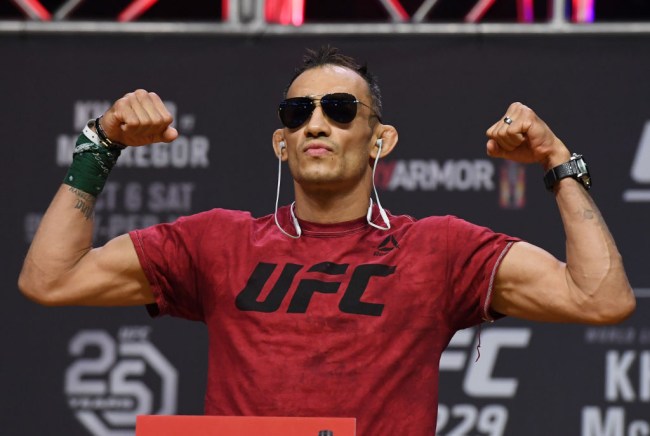 Let’s be honest here. If you’ve ever had any interest in mixed martial arts, any inkling to watch two athletes duke it out inside the Octagon, then there’s absolutely no excuse to miss the upcoming UFC 238 lightweight contest between Tony “El Cucuy” Ferguson and Donald “Cowboy” Cerrone on June 8.

Dubbed “The People’s Main Event” by the UFC, Ferguson vs. Cerrone, which airs as part of the UFC 238 Pay Per View Main card on ESPN+, exemplifies the best of MMA. They’re talented and innovative fighters who kickbox and grapple with precision and style. They strike and exchange with speed and expertise, and roll into danger only to submit opponents off of their backs. They can even breakdance if you ask nicely, but fighting is enough of a dance in itself, and Ferguson and Cerrone provide such extraordinary entertainment value that there’s really no need for any more bells and whistles aside from the fisticuffs.

See, there are very few guarantees in the fight game other than someone must win. Often times, some of the most hyped fights fail to live up to expectations because guys and girls will utilize styles and single-discipline strengths to outpoint their opponents. But not Ferguson, and not Cerrone. These two are all strengths, will few-to-no holes in their games. They’re all-action, all the time.

Examining Ferguson for a moment, he’s 14-1 in the UFC and hasn’t lost since Obama’s first term in office. Currently riding a UFC record 11-fight win streak, “El Cucuy’s” only loss inside the Octagon came after breaking his arm in the first round of a three-round fight, and he still made it to the final bell.

Slick like a puma, Ferguson prances around the Octagon with grace and style, but no doubt he’s a vicious beast, recording four knockouts in the UFC, including one that earned him the distinction of The Ultimate Fighter (back when Brock Lesnar coached for a season) and a Knockout of the Night, to go along with eight more post-fight bonuses. And as impressive as his striking game is, it’s on the mat where Ferguson excels most. A former national champion wrestler at the collegiate level and Brazilian Jiu-Jitsu black belt, “El Cucuy” is so innovative on the ground that they even named a move after him: the m’arce, which is basically another way of choking someone out on the ground in a sort of alligator roll. It’s pretty damn special.

Cerrone, of course, is no slouch. Quite the contrary, actually. The UFC’s all-time leader in wins (23), finishes (16), post-fight bonuses (17), and knockdowns (20), Cerrone is making yet another run for a title, the one thing that has eluded him during a historic 13-year pro MMA career.

Known for his flashy kickboxing style, Cerrone has delivered some of the most impressive knockouts in UFC history, as evidenced by this stunning punch and kick combination that earned him a Performance of the Night bonus at UFC 202:

He also has a rather comprehensive ground game, recording six submissions inside the Octagon to go along with 10 knockouts.

Cerrone is one of those ideal fighters who have finishing abilities and powers everywhere the fight goes, and he’s never afraid to go anywhere for a fight. Seriously, he’s one of the most active fighters in UFC history and never turns down a fight, even if it means bailing on a shot at a money fight with none other than Conor McGregor.

Cerrone has actually been calling for a fight against McGregor all year, ever since he knocked out Alexander Hernandez on the very first UFC on ESPN+ card in January. The fight was nearly booked on a few occasions, but while Cerrone was ready to sign the bout agreement, McGregor, who is still under suspension, was not.

Ferguson has also been linked to McGregor for quite some time. Previously repped by the same management group, Paradigm Sports Management, Ferguson parted ways with the Orange County outfit earlier this year, opting to sign with the Ballengee Group in hopes of fighting for the UFC lightweight title, or facing the Irish MMA superstar. Instead, he was offered the “Cowboy” fight, and no one’s complaining, other than the fact that it’s only scheduled for three five-minute rounds.

This fight has everything a fan could want. There’s two phenomenal, record-breaking fighters. There’s exceptional athleticism and pure combat instincts. There’s wrestling. There’s ninja moves. And there’s even a connection to McGregor and UFC lightweight champion Khabib Nurmagomedov, who might very well face the winner of Ferguson vs. Cerrone later this year.

Quite simply, Ferguson vs. Cerrone is exactly the type of fight you can plan an evening around and shell out a few bones to watch in the comfort of your own home, or a sports bar if that’s your thing. And even if it isn’t the UFC 238 main event or co-main event for that matter, this bout between two of the UFC’s most decorated lightweights is something to mark down on your calendar. The rest of the card is merely a bonus. 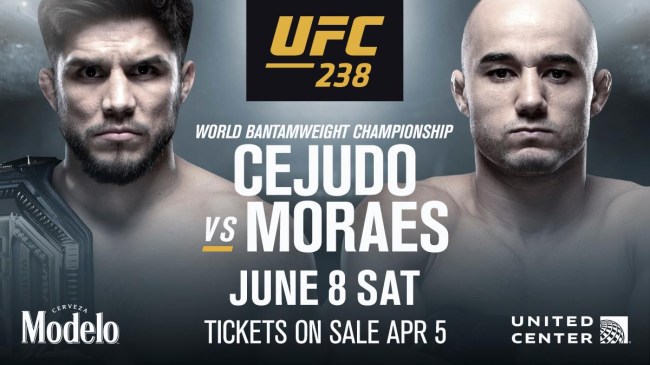