UFC 238 Preview: This Is Not Your Ordinary Co-Main Event – Shevchenko vs. Eye 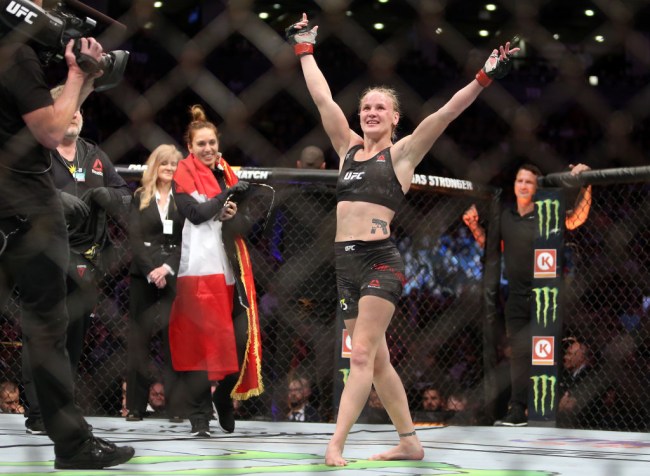 Nothing like a good ole USA vs. Russia battle to fan the flames on this UFC 238 fight week. I mean, if the rivalry was good enough for Rocky IV, Creed II, and a pair of actual Olympic boycotts in 1980 and ‘84, it’s certainly got some legs as flyweight champion Valentina “Bullet Shevchenko and Jessica “Evil” Eye prepare to square off at Chicago’s United Center on June 8.

Slated for the penultimate fight on the UFC 238 Pay Per View main card on ESPN+ — folks in the mixed martial arts business call that the co-main event — the Shevchenko vs. Eye title tilt is an intriguing matchup for a number of reasons; however, in the end, folks just want to waive their flags and cheer on their comrades in action.

But before we digress into geopolitics, let’s remember that there’s an actual fight here, one with fists and knees and elbows, not just faceless internet bots hacking into servers and spreading the whole antivaxer rhetoric.

When it comes to fighting, Valentina Shevchenko is perhaps the most perfect striker in MMA. She literally uses the perfect technique on every punch, every kick, every knee, and elbow. She even has a perfect pirouette every time she throws any number of spinning techniques. This is all on account of her lifelong commitment and dedication to the martial arts.

Shevchenko does crazy stuff like a train in the forest, throwing hundreds of high kicks daily, alongside her sister Antonina, who also fights in the UFC, and their guru, Pavel Fedotov. Nature, she says, gives her strength and tranquility, which is a stark contrast to the lickings she doles out inside the Octagon, but whatever it is that she’s been doing, it’s working because “Bullet” has been lights out at 125 pounds, and even as a bantamweight, she was pretty damn solid, only losing to champion Amanda Nunes by the smallest of margins.

Known predominantly for her striking, Shevchenko is no slouch on the ground either, and actually, she’s recorded more stoppages via submission than knockout during her 16 years as an MMA pro. That’s a seriously startling statistic considering how highly she’s regarded as a standup fighter.

In contrast to Shevchenko’s slick and refined skill set is Jessica Eye’s rough-and-tumble boxing and pressure game, and this might just be the perfect moment to shift the conversation back to opposing nationalisms because while “Bullet” comes from a very strict and textbook Soviet sports mentality, “Eye” embodies America’s gung-ho overzealousness, with fists flying everywhere in a barroom firefight.

Now, calling Valentina Shevchenko a Russian is a bit of a misnomer, and then again, it’s not. She was born in Kyrgyzstan, during the Soviet era, just 20 months before the fall of the Berlin wall, three-and-a-half years before the dissolution of the USSR. Not even alive when Ivan Drago made his cinematic debut in Rocky IV, Shevchenko grew up in an autonomous Kyrgyzstan, and eventually relocated to Peru of all places, with her sister and Fedotov in tow. Despite the complex international background, she’s ethnically Ukrainian, which is pretty damn close to Russian. This I can verify with my own Ancestry.com results.

Eye’s background, the American background, is much easier to trace and explain. She’s from Ohio and currently lives and trains in Las Vegas. It doesn’t get much more American than that, does it? Perhaps the very New Englanders who can trace their lineage all the way back to the Mayflower may disagree here.

Getting back on topic, Eye essentially represents the polar opposite style of Shevchenko. She’s not looking for fancy techniques and spinning back kicks to the midsection. She’s looking to box her way into range and rough you up before taking the fight to the ground and laying on some ground and pound. It’s an MMA style directly linked to Ohio, thanks to the “Godfather of Ground and Pound” himself, Mark “The Hammer” Coleman.

Like Shevchenko, Eye’s been on a tear since the UFC added the women’s flyweight division. She’s 3-0 since returning to her natural weight class; during those years at bantamweight, Eye was routinely at a size disadvantage, which is no longer the case, so it comes as no surprise that she’s elevated herself to contender status in the span of 17 months.

With a style that could give Shevchenko some trouble, Eye is at one major disadvantage on June 8. She faces a significant deficit in terms of experience, having never headlined a UFC fight card or competed into the championships rounds. Even before she enters the Octagon on the UFC 238 Pay Per View main card on ESPN+, Shevchenko’s already been on the UFC marquee on three occasions, and gone the distance, the five-round championship distance, with Nunes, Holly Holm, and Joanna Jedrzejczyk.

These type of things mean something, which is a big reason the oddsmakers have Shevchenko pegged as a -1400 favorite heading into the fight. Then again, Ivan Drago was a massive favorite back in ‘85, and look how that turned out.