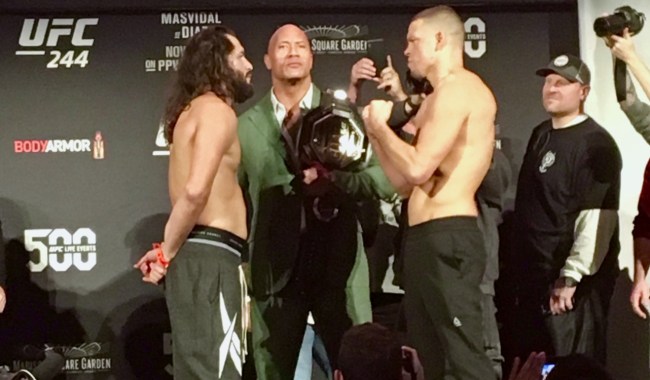 The fight for the UFC’s BMF title is finally here, and even with just hours to go until the UFC 244 Pay Per View main card on ESPN+, there are still new storylines developing.

With headliners Nate Diaz (170.4 lbs.) and Jorge Masvidal (169.6 lbs.) both making weight for the 500th event in UFC history, the UFC 244 main event is official. In total, all 12 fights will go ahead as scheduled; however, the weigh ins were not without some controversy.

Not only did flyweight Jennifer Maia miss weight (127.2 lbs) and forfeit 25-percent of her purse to opponent Katlyn Chookagian, but co-main event fighter Kelvin Gastelum, who weighed in with one minute remaining in the window sanctioned by the New York Athletic Commission, was accused of leaning on his coach in order to deceive regulators. The commission reviewed the video and there was no irrefutable evidence of any wrongdoing.

This wasn’t the only big story of the day …

UFC president Dana White addressed the media in a private ceremony to unveil the new BMF belt, which will be awarded to the winner of the UFC 244 PPV main event between Jorge Masvidal and Nate Diaz.

.@danawhite unveils the UFC #BMF belt. It’s got an “ominous” feel, kind of like the @Raiders.#UFC244 pic.twitter.com/YCBXGPL98i

Taking a few minutes to go over the specs of the belt, which is decorated with black diamonds and reportedly cost $50,000 to make, White then allowed the media to hold the belt … but only with gloves on.

As is customary, the UFC utilized the current media swell to promote their next big event: UFC 245 on December 14.

That’s one hell of a card there. It’ll be available on ESPN+. 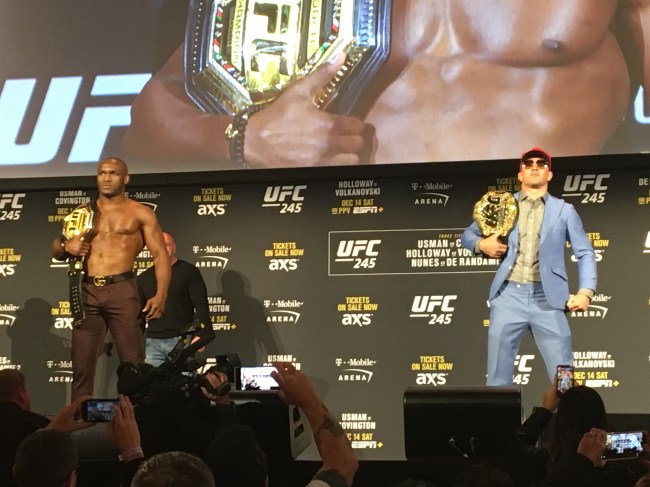 The Rock” to Play MMA icon, The Smashing Machine

Set to produce and star in an MMA biopic, “The Rock” will play former UFC champion Mark “The Smashing Machine” Kerr, who was the BMF of his day … back when the UFC still allowed headbutts.

Can you smell what the @TheRock is …#UFC243 #BMF pic.twitter.com/LeRopJoIDB

Johnson briefly left the stage while the UFC 244 fighters faced off and then returned with the BMF belt around his shoulder for the final staredown between Nate Diaz and Jorge Masvidal.

The winner of the UFC 244 Pay Per View main event on ESPN+ will earn the distinction of the baddest man in the game and be presented with the BMF championship belt by none other than “The Rock.”