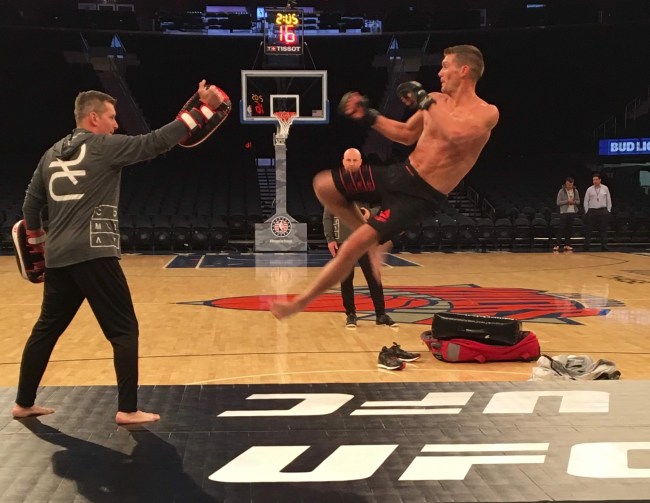 No doubt the UFC BMF title bout between Nate Diaz and Jorge Masvidal will be the fight that draws you to the television screen for the UFC 244 Pay Per View main card on ESPN+. But what about the other fights on the card? Will there other UFC BMFers throwing down at Madison Square Garden on November 2 (7 p.m. PST / 10 p.m. EST) for the UFC’s 500th event?

Of course there will.

UFC 244 is completely stacked from top to bottom. It’s a fight night of legends, former champions and challengers, fan favorites, grizzled veterans, and undefeated prospects. It’s an absolutely fantastic collection of fights, so without wasting any more time, here are a few spectacular scraps on the UFC 244 fight card that are flying under the radar.

It’s been a few months since we’ve seen seventh ranked welterweight Stephen “Wonderboy” Thompson in action, and the karate specialist is taking a high-risk fight with the oh-so-violent Vicente Luque, ranked fourteenth.

Thompson, the more experienced of the two, has fought for the UFC title on multiple occasions, coming up short in a pair of championship fights. Luque, on the other hand, is just starting to make his run towards a title shot.

The winner of six-straight fights, Luque can really do it all, not only pulling slick submissions and landing vicious knockouts, but, when the time calls for it, engaging in a all-out wars. His two Fight of the Night awards in 2019 alone are a testament to his status as one of the most entertaining fighters in mixed martial arts.

So will there be a changing of the guard at welterweight? Will Stephen Thompson pass the torch to Luque, or will the veteran return to form and become the first UFC fighter to win three bouts at Madison Square Garden?

Gregor “The Gift” Gillespie may just be the most under-the-radar fighter in the UFC. A perfect 13-0 during his MMA career, including 6-0 in the UFC, Gillespie has climbed to the number eleven-ranking in the UFC’s super stacked lightweight division. He done it on account of tremendous wrestling prowess and toughness, recording three knockouts and two submissions inside the Octagon.

A former UFC title challenger, Kevin Lee returns to the lightweight division after a brief dalliance at welterweight earlier this year. Refreshed and renewed after switching his training camp to Montreal’s TriStar Gym, where he trains alongside Georges St-Pierre (a.k.a. GSP), Lee will attempt to return to the mix at 155 pounds, and he’ll have to deliver an impeccable performance to best Gillespie.

In a lot of ways, Lee and Gillespie mirror each other, although “The Gift” owns a slight advantage in the wrestling department, whereas Lee is the more accomplished striker and submission artist.

It’s an intriguing fight, with stakes, as Gillespie could realistically be two wins away from a UFC title shot, should he win at UFC 244. Lee can not afford to drop this one if he ever wants to return to title contention and fulfill the promise he displayed early on in his career.

This is definitely a fight for hardcore MMA fans, but pay attention to this one, as both Burgos and Amirkhani have major upside in the UFC featherweight division.

A slick and stylish striker from New York, Shane Burgos has only lost once in his entire MMA career, and has already climbed into the top-15 at 145 pounds. He’s a standup fighter who has great hands and movement. He’s got some flash and finishing ability, and puts on a good show.

Standing opposite Burgos will be European sensation Makwan “Mr. Finland” Amirkhani, who is making his U.S. debut.

An imposing wrestler with length and height, Amirkhani has been improving his striking game at Straight Blast Gym in Dublin, Ireland, the same camp that produced UFC legend Conor McGregor, studying with coach John Kavanagh. And while “Mr. Finland’s striking has come a long way, the ground game is still his forte, which is exactly why Amirkhani will attempt to wrestle Burgos to the mat and look for submission.

This is a fantastic striker vs. grappler bout, and should Amirkhani win, he’ll likely overtake Burgos in the standings. Those are some very real stakes.

Stay tuned for more daily UFC 244 primers. The Pay Per View main card and the Masvidal vs. Diaz BMF title fight are not to be missed.