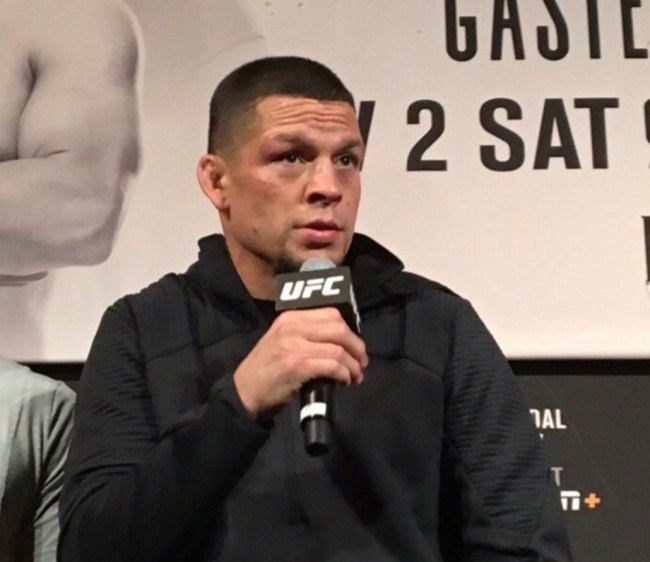 UFC 244 fight week is just underway, and the event is already shaping up to be one of the most ludicrous, absurd, and memorable fight cards in history.

For the first (and only?) time, the BMF title is on the line. Nate Diaz and Jorge Masvidal will headline the PPV main card on ESPN+, live from Madison Square Garden on November 2, and the combat sports world will never be the same.

The Diaz vs. Masvidal fight is easily enough entertainment value to tune in for what is bound to be a surefire Fight of the Year and Event of the Year candidate. The rest of the fight card is completely stacked, with nearly a dozen other badass bouts between former title challengers, hot prospects, seasoned veterans, and no less than 17 ranked fighters. But now, just days after Nate Diaz sparked major controversy, vowing to walk away from the fight after a tainted supplement was found in a pre-fight drug test (for the record, he’s been completely exonerated and the fight will proceed as scheduled), the UFC 244 card, and the coinciding fight week, just got that much bigger after a pair of announcements.

Yes. You read that correctly, the President of the United States of America, the leader of the free world, is taking time out of his busy golf playing schedule to attend a UFC PPV fight. Clearly the UFC 244 PPV main event between Nate Diaz and Jorge Masvidal is a big deal, but this big? Who knew?

President Trump has a lengthy connection to mixed martial arts, not only opening the doors of his Taj Mahal in Atlantic City, New Jersey to Dana White and the Fertitta brothers during the early days of the Zuffa-backed UFC, but he was also a partner in the short-lived Affliction promotion, where he cavorted with Russian MMA legend Fedor Emelianenko.

Oh, and UFC president Dana White even spoke on Trump’s behalf at the 2016 Republican National Convention.

Sport and politics. Trump and the UFC. They’re buddies.

Can You Smell What (Else) the Rock is Cooking?

Presidential participation is not the only upgrade UFC 244 fight week has received.

Already on board to present the BMF title to the winner of the UFC 244 PPV main event on ESPN+, “The Rock” will join UFC 245 headliners Kamaru Usman, Colby Covington, Max Holloway, Alexander Volkanovski, Amanda Nunes, and Germaine de Randamie at a press conference at the Hulu Theater at Madison Square Garden (BTW, the event is open to the public, but you’ll need tickets to enter the venue).

Fans are already speculating what the news will be.

Conor McGregor’s comeback fight?
His plan to fight Brock Lesnar in the UFC?
He’s starring in a new MMA related movie?
His Presidential campaign to run against Donald Trump?
All of the Above

No one quite knows yet, but it is confirmed that “The Rock” will be all around UFC 244, from fight week events to his cageside seat for the PPV main event between Nate Diaz and Jorge Masvidal.

The 500th Event in UFC History

With UFC 244 marking the 500th event in the history of the UFC, it’s clear that Dana White and the promotional brass are pulling out all the stops for this highly anticipated BMF title fight. And now, with the inclusion of Trump and “The Rock,” along with a score of other high-profile celebrities, the card, and PPV main event on ESPN+, is receiving an additional boost that will propel the event into the media stratosphere.

Come Saturday, UFC 244 will, no doubt, be the biggest news story in sports media, and it might even cross over into the front pages of every major publication in the world.