UFC 245 Storylines: A Grudge Match, Some GOATs, And Bantamweight Contenders 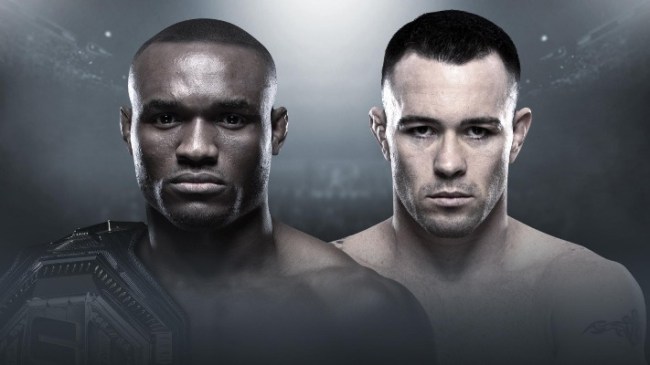 Stacked from top to bottom, and bottom to top, UFC 245 is as deep a card as any in recent memory. And while there’s no major name atop the marquee, UFC 245 features three compelling and competitive title fights, along with a pair of excellent bantamweight bouts to kick off the PPV main card on ESPN+.

There are current champions, former title-holders, up-and-coming contenders, and savvy veterans all fighting at UFC 245. There are also fan favorites, touted prospects and undefeated fighters. However, the biggest story of the night is a heated and contentious grudge match between bitter rivals. UFC welterweight champion Kamaru Usman and Colby “Chaos” Covington, a former interim champ, will finally sling leather in the middle of the Octagon.

It’s a battle of bad blood between sworn enemies, and it all goes down on PPV on ESPN+.

Who Is the Best Welterweight in the World?

Historically one of the toughest and most competitive divisions in MMA, welterweight (170 lbs.) has long since been dominated by fighters with a strong wrestling base.

Former champions like Georges St-Pierre, Matt Hughes and Tyron Woodley were all known for their wrestling prowess, so it comes as no surprise that the two men competing for the welterweight title at UFC 245, Kamaru Usman and Colby Covington, possess dominant wrestling games. It’s almost par for the course.

Attempting the first defense of the UFC welterweight title he won in March 2019, Usman has been perfect ever since joining the UFC in 2015, going 10-0 inside the Octagon. He’s shown improvement every step of the way, utilizing his wrestling, athleticism, and cardio to outlast opponents. Usman has also demonstrated the ability to adapt his wrestling to compliment his striking game, and vice versa, as evidenced by his most recent performance against Tyron Woodley.

In a similar fashion to Usman, Covington also employs a cardio heavy wrestle-box approach. In fact, it’s tough to remember a time when two fighters have been so evenly matched in a title fight.

Covington is another fighter who has made major strides over the last four years. Dropping his lone fight inside the Octagon at UFC 194, Covington has gone 7-0 since December 2015. He’s looked impenetrable of late, even dominating a pair of former champions over the course of 25 minutes in his last two fights.

Of course, the real knock of Covington is his heel persona and complete trolling of the entire MMA fanbase. He’s perfectly used this villain schtick — political associations with President Trump, Don Jr., et al. — to advance his career and move to the top of the division.

At this point, basically everyone in the UFC wants to beat him up, and Usman will get his chance on December 14, carrying the weight of the entire UFC roster (including Covington’s teammates at American Top Team) on his shoulders inside the Octagon at UFC 245.

It’s basically as heated a grudge match as the UFC has promoted in years. Well, at least since the last time Covington fought somebody (or rather, didn’t fight Tyron Woodley).

A Pair of UFC GOATs: Max Holloway and Amanda Nunes

While the Usman vs. Covington title fight will close out the UFC 245 Pay Per View main card on ESPN+, featherweight king Max Holloway and double champ Amanda Nunes will defend their titles just before the main event.

Currently the UFC’s longest tenured champions, Holloway and Nunes also share another distinction: they are arguably the greatest fighters in the history of their respective divisions, and that’s the kind of legendary action that’s worth shelling out a few extra bones for on PPV.

For Holloway, UFC 245 marks his fourth title fight in a little over a year. He’s been incredibly active since December 2018, even bumping up a weight class to compete for the lightweight title this past April. And while his bid to become a dual champ was unsuccessful, Holloway is still riding a 13 fight win streak at 145 pounds, including a pair of finishes over former champion Jose Aldo. Those numbers are unparalleled in the UFC.

Nunes has been equally as impressive, and dominant, over the last four-and-a-half years.

Bringing her current nine-fight win streak into UFC 245, Nunes has only been taken the distance by one fighter during her entire UFC run. Outside of a pair of decisions over Valentina Schevchenko, Nunes has been absolutely lights out inside the Octagon, knocking out her last three opponents, along with highlight reel finishes over former champions like Ronda Rousey, Holly Holm, Miesha Tate, and Cris Cyborg.

At UFC 245, both Holloway and Nunes face unique challenges against dangerous opponents. There are paths to victory for both challengers, Alexander Volkanovski and Germain de Randamie, so the champions will need to deliver on Pay Per View.

Against Volkanovski, who is 7-0 in the UFC and has won 17 straight overall, Holloway will need to implement his length and range to keep the fight at a distance. Volkanovski, a former rugby player, is a heavy hitter with massive power and the athleticism to take the fight to the champion. Holloway, however, has some of the best angles in the game, always moving his feet to find new real estate to land punches, while stifling and confusing his opponents.

Nunes faces the opposite challenge in her rematch against former featherweight champion de Randamie. A kickboxer with range and power, de Randamie will attempt to keep Nunes at distance with kicks and punches; however, Nunes is a steamroller of a striker, able to use her power and pressure to get inside on basically every opponent she’s faced.

Both Holloway and Nunes are the best at what they do, so UFC 245 is yet another chance to see two of the greatest fighters of all time.

Who is the Next Bantamweight Challenger?

Kicking off the UFC 245 PPV main card on ESPN+ are a pair of bantamweight fights between a number of well known names. UFC Hall of Famer Urijah Faber will take on fourth ranked Petr Yan, while legendary former featherweight champion Jose Aldo makes his debut at 135 pounds against first ranked Marlon Moraes.

A dense and dangerous shark tank, the bantamweight division is basically wide open these days, as current champ Henry Cejudo has been out of action since June. With some uncertainty surrounding the bantamweight belt (will Cejudo drop back down to 125 lbs. to defend his flyweight belt first?) it’s more than likely that the next challenger for the 135 pound title will come from the UFC 245 main card, as Faber, Yan, and Aldo would have legit shots at campaigning for the Cejudo fight.

Then again, there’s also Moraes, a recent title challenger, along with former champions Dominick Cruz, Frankie Edgar, and T.J. Dillashaw near the top of the division. Factoring in Aljamain Sterling and Cory Sandhagen, it’s safe to say that bantamweight is as deep as it’s ever been, so an emphatic win at UFC 245 is absolutely essential.

There are literally more than a handful of fighters who could campaign for the next crack at Cejudo and the bantamweight title, which is what make the stakes here so high.

A fighter like Petr Yan, who is 5-0 in the UFC, but still relatively unknown, will need to introduce himself to the audience in stunning fashion. His opponent, Faber, however, is coming off his first knockout in 17 UFC fights, and at 40, is looking more dangerous than ever.

Aldo brings a whole different angle to his fight with Moraes. A former longtime champion, Aldo would automatically become a player in a new division, so long as he can show that he can make the weight. It’ll be interesting to see how Aldo looks on the scale at 135. Until then, it might be too soon to imagine how his game will translate to the faster pace at bantamweight.

With so much riding on every punch, these fights have a high potential for action and output. There’s also the potential for stalemate fights here, but Faber, Yan, Aldo, and Moraes all have pretty solid credentials in the action and finishing departments.