UFC 247: Why Dominick Reyes Is A Huge Threat To Upset Jon Jones 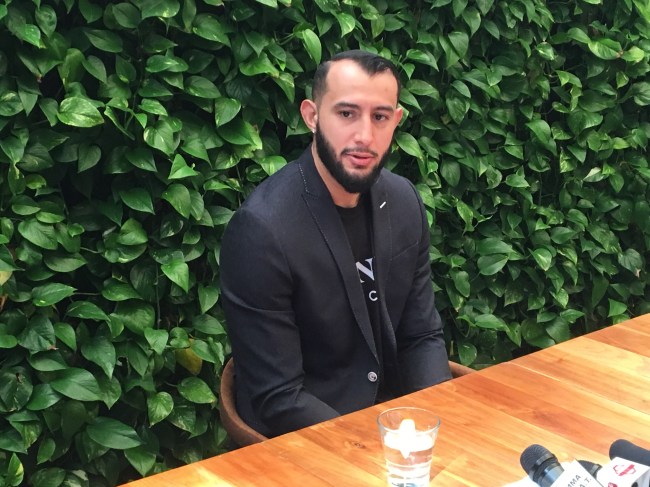 When you think of the biggest upsets in UFC history, no doubt your brain conjures up visions of Holly Holm kicking Ronda Rousey in the face, or Matt Serra rocking and shocking Georges St-Pierre.

Upsets in combat sports are both mystifying and satisfying. They’re never supposed to happen, which is why they stick with fans and viewers, leaving deep and memorable impressions. They also lead to massive payouts at the sports books, resulting in fistfulls of cash for those risky bettors who take the action on the underdog.

The +360 line at the betting window is just one of the many reasons people are throwing down stacks of green on challenger Dominick “The Devastator” Reyes to upset legendary light heavyweight champion Jon “Bones” Jones this weekend at UFC 247. But there’s more to it than just the numbers.

A relative newcomer to mixed martial arts, Reyes is a former collegiate football star who shifted gears to MMA in 2014 when he took his pigskin dreams as far as they could go. His years on the gridiron prepared Reyes for the rigors of training, while providing him with focus, fortitude, and perseverance. His championship mentality is just another reason that Reyes is a very live dog against Jones at UFC 247.

Now, we hear plenty of fighters talk about their championship mindset, but Reyes is “married to the game” as he once said. He lacks distraction, which is something that has plagued Jones, widely considered the greatest MMA fighter of all time, during his years at the top. It’s impossible to equate maturity with success inside the Octagon, but Reyes, along with his team at Cobra Kai Mixed Martial Arts in Victorville, CA, has been preparing for this fight for years, while Jones has essentially had a 10 week training camp to hone his skills for the UFC 247 main event.

Examining the UFC 247 main event, MMA fans and pundits will quickly point to Reyes’ devastating left hand. It’s the biggest weapon in his arsenal, and a tool that can shut anyone’s lights out.

Winning seven of his 12 pro MMA fights by knockout, Reyes’ power is well documented. However, it’s not just in his hands. Reyes also has an excellent kicking game, recording two head kick knockouts, well, maybe three, considering that he once flatlined Ovince St-Preux at the final bell at UFC 229: Khabib Nurmagomedov vs. Conor McGregor, which just so happens to be the most widely viewed MMA event in UFC history.

Ultimately, the ref decided that the fight would go to the judges’ scorecards, but everyone knows that Reyes should have gotten the finish there.

"I'm literally willing to die in there."

UFC light heavyweight title challenger @DomReyes
talks about his upcoming fight against Jon Jones at #UFC247, his heart & toughness, the culture of cheating in MMA, and his admiration for #KobeBryant, whom he called his idol.@BroBible pic.twitter.com/brFSrrLp69

The kicking game probably won’t be much of a factor against Jones, honestly, but every weapon is a good weapon inside the Octagon, and if they land, Reyes’ weapons will have massive implications at UFC 247.

For his part, Jon Jones is one of those fighters who rarely gets hit. Watching his fights, it’s tough to recall a time that Jones ate any big shots. Sure, he got busted up early in his first fight against Alexander Gustafsson, but Jones is technically sound, and good at avoiding power shots. But there’s an air of the unknown here. Can Jones take Reyes’ best punch? Because we already know Reyes can eat power punches for dinner. Just look at his self-described worst performance of his career against Volkan Oezdemir.

Oezdemir, a former title challenger, is known as one of the heaviest hitters in the light heavyweight division, and Reyes persevered through a broken nose in the first round to outlast his opponent, all while respirating blood for the majority of the fight. Have we ever seen Jon Jones deal with that sort of adversity inside the Octagon?

In his most recent title defense, Jones spent the majority of the 25-minute contest avoiding the power of Thiago Santos, who fought most of the bout with a heavily compromised knee, torn ligaments and all. Jones ultimately won that fight by split decision, but he looked somewhat pedestrian inside the cage, using point fighting tactics to outlast Santos.

This is not to speak badly of Jones, who naturally has every single weapon and MMA fighter could ever hope to develop. Point fighting is a legitimate way to win, especially given the rigors of defending the title, but just realize that Dominick Reyes is not only bigger than Thiago Santos, but he packs an equal amount of power and brings a higher level of speed and athleticism into the Octagon. So, how will Jones deal with that?

Reyes Needs to Avoid the Ground

If there’s one place that Dominick Reyes can not beat Jon Jones, it’s on the ground.

Sure, Reyes does have some amateur wrestling experience, but Jones is really on his own level on the mat, and in the submission game.

This is Reyes’ kryptonite, so to speak.

Reyes will need to bring the pressure against Jones, and move out of the pocket after dishing out strikes. Should Jones force a clinch, especially against the cage wall, it could be a short night for the challenger.

Fortunately, all of those years playing football at a high level have prepared Reyes for the necessary footwork to slide in and out of the pocket. Seriously, the guy is a high level athlete. He just needs to remember that there’s no way he ever wants to be underneath Jon Jones, desperately trying to defend against some of the nastiest and most hellacious elbows in the history of MMA.

The Air of Invincibility

Aware that there is one place where Reyes is really at a major disadvantage, “The Devastator” just needs to stick to the things that have propelled him to a 12-0 record as an MMA pro.

Unlike boxing, where championship fighters go 20-0 or 30-0 en route to titles, MMA is a sport where everyone loses sometimes. Even Jones has a loss on his record, although that may be one of thee most controversial decisions in UFC history, so Reyes’ perfect record is even more impressive.

At present, only two UFC champions have undefeated records: lightweight champion Khabib Nurmagomedov and middleweight champion Israel Adesanya; and look at those two guys? They’re nothing less than the most dominant fighter in MMA (Khabib) and the most dynamic striker in the UFC (Adesanya). And, a major part of their game is the aura of invincibility.

Like, seriously, can you really imagine anyone beating Khabib right now? It’s not just because his wrestling is really, really ridiculously good, it’s because no one has ever done it before, and it’s literally impossible to figure out how it can be done. At 18-0, Adesanya is much the same, albeit with a striking base. Every time we try to figure out how he can be defeated, he brings a new tool into the Octagon. We’ll see how that plays out for Adesanya next month at UFC 248, when he fights Yoel Romero for the title.

But back to Reyes …

Dominick Reyes has never been defeated inside the cage, so who’s to say that Jones is the person to take his 0? Well, it’s certainly plausible, which is why Jones is the favorite, but still, an undefeated fighter in a world title fight is always a force to be reckoned with.

He’s Doing it For Kobe Bryant

A southern California native, Reyes was devastated to learn of the tragic passing of basketball legend Kobe Bryant.

Bryant was Reyes’ athletic idol, and “The Devastator” has been open about wanting to win the title and honor his hero.

This is in no way a rational argument to explain why Reyes will defeat Jon Jones at UFC 247, but much like the whole world believes that the Los Angeles Lakers and Lebron James will win the NBA title for Kobe, the same can be said for Dominick Reyes.