Why Saturday’s UFC 252 On ESPN+ Is A Must-Watch 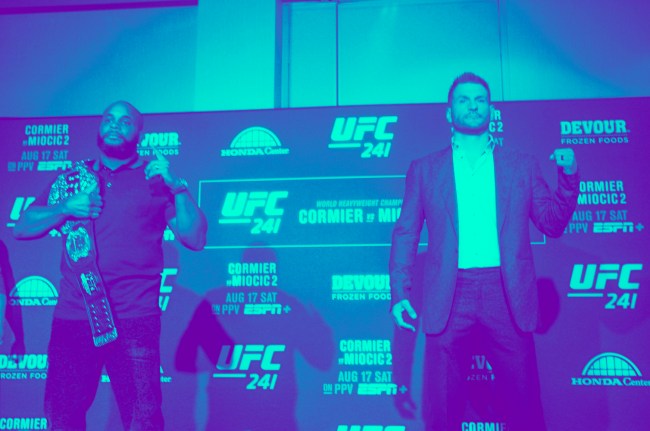 If you haven’t already taken notice, UFC 252 is a pretty big deal, featuring some tasty matchups that includes a trilogy fight for “all the marbles” between current two-time Heavyweight Champion Stipe Miocic against a former champion, Daniel Cormier, in the main event. That should be enough to tune-in on ESPN+ Saturday, August 15th, but, because you may need some more storylines to really get you excited, fear not, because we’ve got those for you.

Now, before we dive into some of those storylines, one thing’s clear: No sports fan wants to miss out on UFC 252 — so make sure to tune in on ESPN+. For those wondering how to watch UFC 252 this weekend, we’ve outlined the must-know information below in order to do so.

Although UFC 252 isn’t until Saturday, August 15th, that doesn’t mean you can’t already order the event on ESPN+.

And, in addition to the headliner of Stipe Miocic vs. Daniel Cormier 3 in the Heavyweight Title bout, there are a few other tasty matchups to look forward to as well, meaning you can sit around all day long and take in the drama of the UFC — and, oh boy, will there by drama.

OK, so now to the good stuff: Why UFC 252 is an absolutely, positively must-watch for all you sports fans out there. Since the atmosphere will be electric, here are the storylines to keep an eye on.

As mentioned above, this is the rubber match between two of the most well-known and successful Heavyweight fighters in UFC history, so UFC 252 really has a lot in store for the legacies of both Daniel Cormier and Stipe Miocic. But will one reach GOAT status with a victory?

Look, Miocic is 19-3-0 in his career (with one of those losses coming to Cormier at UFC 226), and Cormier is 22-2-0 (with one loss coming to Miocic at UFC 241), so it’s not crazy to think that one of these guys could end up earning the all-time greatness moniker after winning this fight. They’ve beaten pretty much every challenger, so this bout is considered the Super Bowl in this weight class — which clearly makes it have lots on the line.

Not only does Sean O’Malley enter UFC 252 undefeated in his career, but he’s got some added motivation to keep that perfect record going against his opponent Marlon Vera, who had some strong words in a recent interview with Just Scrap Radio for BJPENN.com.

“I know how I can win this fight. The first thing we need to do is make weight and not get COVID. I’m f*****g ready, what I do to this guy people won’t expect it.”

“I think I am just going to make him quit, that is what I do. My cardio is great and my jiu-jitsu is good. If he takes me down he will be in trouble,” Vera said. “I’m going to get it done. Just baptize him like Gamebred does and put them out. That is what I am thinking like.”

Everybody loves some good trash-talk in sports, and this bout sure has that already leading up to the Bantamweight fight at UFC 252. Now, can Vera back it up?

What Would A Loss Mean For Junior Dos Santos?

Junior Dos Santos is a former UFC Heavyweight Champion who’s currently rated No. 5 in the division’s ranking, but could UFC 252 be the beginning of the end for his career? At age 36, Dos Santos might not have much left in the tank should he lose to Jairzinho Rozenstruik on Saturday night. Although Junior’s name has weight, could a loss to “Bigi Boy” mean being ousted by the UFC? Will he retire? Will he get fired? It’s an intriguing storyline to watch for sure.

If Daniel Cormier Loses to Stipe Miocic, Will He Retire?

Daniel Cormier is 41 years old, and, should he lose his highly-anticipated UFC 252 Heavyweight Championship bout with Stipe Miocic, it’d mean back-to-back losses to his rival, and, no doubt, some questions about his future in the sport. Cormier is two years removed from defending the UFC Heavyweight Championship when he held the title, and a loss to the reigning champ on Saturday might begin the whispers about ending his career altogether.

Remember, ESPN+ is the exclusive home for all the action inside the Octagon. So, if you’re already planning on watching UFC 252, you’ll want to make sure you score yourself all the dope content that the streaming service offers. Just look at some of the programming on ESPN+ that you’ll get with a subscription.

If you’re a sports fan, ESPN+ is the one-stop shop to consume all sorts of your favorite content. And while waiting for UFC 252 to take place on August 15th, the streaming service will be a lifesaver to get your sports fix with hours of content.