UFC 262 Stream – How To Watch Oliveira vs. Chandler 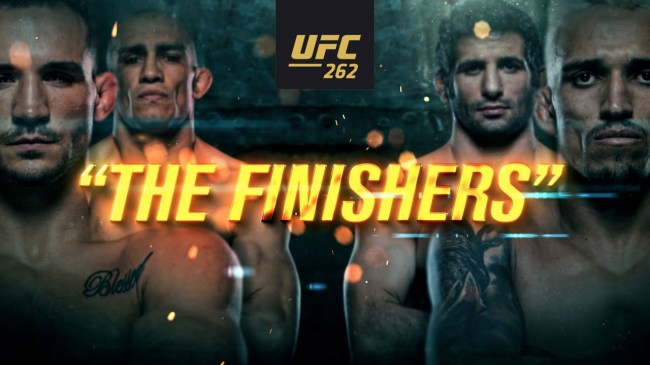 UFC 262 will go down tonight with a lightweight title fight, live from the Toyota Center in Houston. A welterweight battle between Nate Diaz and Leon Edwards was originally booked as the co-main event on this card, but tonight’s UFC 262 stream isn’t going to disappoint with Michael Chandler vs. Charles Oliveira as the main event.

These are two of the very best fighters in the world at 155 pounds, with championship pedigree and superhuman combat skills. From Oliveira’s record-setting submission game, to Chandler’s fight-ending power, the UFC 262 main event features two incredible mixed martial artists, with styles custom built for action.

If you’re looking for a free UFC 262 stream, allow us to point you in the right direction to watch UFC 262 online….

Below, our guide for how to stream UFC 262 online via ESPN+, on all your favorite devices.

It’s easy to sign up for an ESPN+ account so you can watch the UFC 262 live stream. After you buy the fight on your phone or computer via ESPN+, you can steam UFC 262 on your smart TV via a number of different ways.

The landing page to stream UFC 262 via ESPN+ looks like this on your mobile device:.

You can watch the UFC 262 prelims live on ESPN+.

First, log-in to your ESPN Plus account. Second, all you have to do to buy the PPV is go to the ESPN+ UFC landing page (right here) and then hit “Already have ESPN+?” You’ll be able to login and buy the UFC 262 stream so you can watch Usman vs Burns in the main event.

How to watch the UFC 262 stream at home:

Now that you have ESPN Plus and you bought the UFC 261 stream, it’s time to tune-in. Here’s how you watch UFC 262 on a number of devices, including the following: