What’s At Stake At UFC 262: Oliveira vs. Chandler 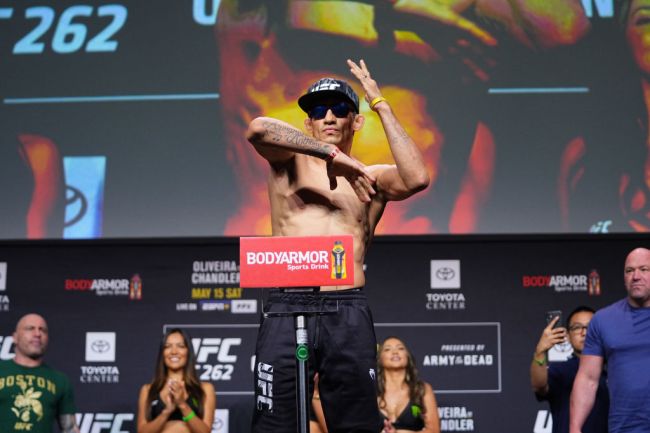 Whether you like it or not, a new lightweight champion will be crowned this weekend at UFC 262.

Following the retirement of lightweight G.O.A.T. Khabib Nurmagomedov last October, contenders Charles “Do Bronx” Oliveira and “Iron” Michael Chandler are now set to fight for the ultimate prize in MMA, squaring off for the vacant UFC lightweight title on Saturday, May 15 (7 p.m. PST / 10 p.m. EST).

While Oliveira and Chandler may not yet be household names, they are two of the very best fighters in the world at 155 pounds, with championship pedigree and superhuman combat skills. From Oliveira’s record-setting submission game, to Chandler’s fight-ending power, the UFC 262 main event features two incredible mixed martial artists, with styles custom built for action.

Now just a day away from UFC 262, it’s time to dive into the PPV main card, which airs on ESPN+, and examine the big fights. Actually, the last three fights on the prelims (on ESPN+) are all pretty interesting matchups for the UFC hardcores, but for now, let’s focus on the main event between Oliveira and Chandler, the co-main event between former interim lightweight champion Tony “El Cucuy” Ferguson and Beneil Dariush, and a wicked featherweight matchup between striking sniper Edson Barboza and rising contender Shane Burgos.

Don’t worry, we’ll also give you a little betting scoop, since that’s the game everyone likes to play these days.

Take it away boys …

It’s a real shame that UFC megastar Nate Diaz needed to delay his return to the Octagon by a few weeks and miss out on UFC 262. His popularity and visibility would have been the perfect vehicle and setup for the UFC to introduce their new lightweight champ with a proper coronation.

With Diaz dropping off the card a few weeks ago, postponing his fight against Leon Edwards to next month’s UFC 263, the UFC 262 PPV card has lost some of its mass appeal, but that doesn’t mean the main event will be any less interesting.

First, consider the career accolades of Charles Oliveira (30-8 MMA, 18-8 UFC), the greatest submission artist to ever step foot inside the Octagon. With 14 submissions during his decade-long career in the UFC, Oliveira has been a magnet for action, accumulating 16 fight night bonuses in 27 UFC appearances.

Joining the UFC in 2010, when he was just 20 years old, Oliveira has always been a jiu jitsu savant, delivering stunning chokes and highly technical joint locks. And while he regularly displayed incredible feats of athleticism and combat inside the Octagon, Oliveira struggled with consistency and making weight during an ill-fated run at featherweight.

Moving back to lightweight in 2017, Oliveira has finally found his form, winning nine of his last ten fights, including eight straight, seven of which came by way of stoppage.

Unlike Oliveira, who spent more than ten years chasing his very first UFC title shot, Michael Chandler (22-5 MMA, 1-0 UFC) will fight for the lightweight belt in only his second UFC appearance. Also, whereas Oliveira has built his name and reputation on his submission game, Chandler is a heavy-handed puncher, who has a knack for big knockouts, as evidenced by his UFC debut at UFC 257, when he flattened Dan Hooker in two-and-a-half minutes.

Prior to signing with the UFC in 2020, Chandler, who was also an All-American wrestler at the University of Missouri, was a three time lightweight world champion with Bellator where he was part of one of the greatest lightweight MMA fights of all time: his 2011 title fight against former UFC champ Eddie Alvarez.

Stylistically, Oliveira vs. Chandler is a particularly wild fight considering that their games are near mirror images of one another. Even their frames — Oliveira’s length and lankiness vs. Chandler’s compact stockiness — are polar opposites, meaning that both fighters will need to use creative approaches to close distance and implement their weapons.

For Oliveira, striking is merely the setup. It’s a means to gain position and move inside for the clinch, where Oliveira’s able to slither his way around opponents necks and limbs and force takedowns or submissions. But even in a standing position, Oliveira is still a submission threat, able to pull guard or sink in a guillotine at any moment.

Chandler, who is a few inches shorter than Oliveira, will also be at a reach deficit against “Do Bronx,” making entries into boxing range and bodywork a very important facet of this fight.

Normally, it’d also be reasonable to consider Chandler’s wrestling pedigree as part of his offensive game. However, given Oliveira’s proficiency and mastery on the mat, it’s safe to consider that Chandler will look to keep the fight standing and hunt for the knockout.

Now, I’m not quite ready to make my final pick on this fight (Hint: I’m leaning towards Chandler), but given their high finishing rates — Oliveira’s finishes at a 90-percent rate, while Chandler stops his opponents 77-percent of the time — I’m rather certain that this fight is going to be absolutely nuts, and end in a finish.

Seriously, anyone who’s followed the UFC for the last few years would know that.

Currently ranked fifth in the UFC lightweight division, Ferguson is known as one of the most creative fighters in the UFC, implementing facets of Wing Chun and traditional Chinese Martial Arts into his MMA arsenal. Ferguson, a former breakdancer, has incredible dexterity on the ground as well, as evidenced by his six submissions inside the Octagon.

Already a cult figure in MMA, on account of his wild and unorthodox style, Ferguson is known for delivering bloody fights, dicing up his opponents with slashing elbows in close range. Ferguson’s weaponry is unlike any other fighter on the UFC roster, and he’ll need all of his tools against Dariush at UFC 262.

Likely unknown by the casual audience, jiu jitsu ace Beneil Dariush has been in the UFC for seven years, racking up five submissions inside the Octagon. However, it’s the surprising power in his hands and three highlight reel knockouts that have made the ninth-ranked Dariush into a well-rounded threat.

A winner of six straight, Dariush is on the best run of his career, steadily climbing the lightweight rankings.

In his most recent fights, Dariush has shown an increased desire to engage with his opponents, and he’s vowed to match Ferguson punch for punch, kick for kick, elbow for elbow, etc. And, while that could just be gamesmanship, the normally chill Dariush seemed more than a little ticked off with Ferguson at a pre-fight press event. The disdain is real, and these two will come forward and exchange shots from the opening bell.

Again, it’s tough to call a winner here just yet, but at +120, I like the action on this fight not going the distance.

The second fight on the UFC 262 PPV main card on ESPN+, this featherweight matchup between ninth-ranked Burgos and thirteenth-ranked Barboza would be a lock for Fight of the Night on any other card, and has amazing potential for the kind of fireworks every fight fan hopes to witness.

Whereas Oliveira and Chandler have converse styles and Ferguson and Dariush bring well-rounded attacks into the fight, Burgos and Barboza have similar intentions on the feet, albeit by using drastically different techniques.

For his part, Barboza (21-9 MMA, 15-9 UFC) has been one of the most feared strikers in the Octagon for the last decade on account of his lightning fast speed, accuracy, and punishing kicking game.

The owner of some of the UFC’s greatest knockouts of all time, Barboza is a dazzling striker and kicker. And, if not for some bad luck at the hand of the judges, his career may be in an entirely different place right now. Still, he’s always a threat, and always lethal, so Burgos will need to stay inside kicking range.

On the other end, Burgos (13-2 MMA, 6-2 UFC) is an action fighter and volume striker, who delivers combos in close range. Using his length to keep shorter opponents at bay, Burgos will need to carefully manage distance in this fight against Barboza and bring the fight in close.

If he can make it dirty, it’s his fight to win. However, if Barboza controls the range, it’s likely because he’s picking and landing his shots from the outside.

Expect lots of action on the feet in this one.

There you have it, a close look at three killer fights on the UFC 262 PPV main card.

Check them all out on ESPN+ PPV on Saturday, May 15, and catch you on the other side.