Tony Ferguson’s the Type of Guy … Worth Watching UFC 256 For: Here’s Why 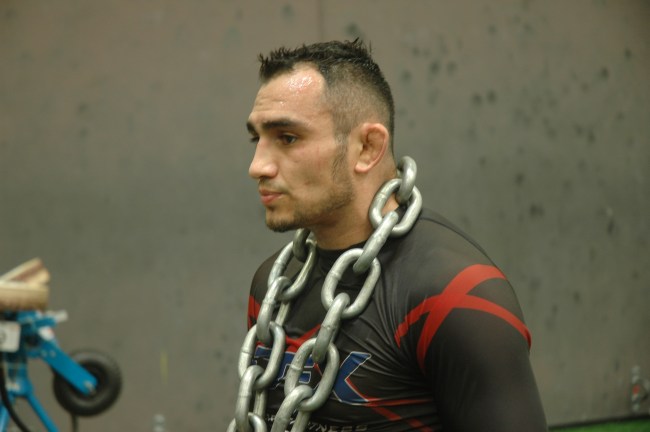 So here’s the deal …

UFC flyweight champion Deiveson Figueiredo is defending his title this Saturday at UFC 256. Figueiredo, who faces challenger Brandon Moreno on December 12, will attempt to set a new UFC record, vying to become the only champion to defend their belt twice within a three week span. It’s no small feat.

However, on the occasion of this holiday season UFC Pay Per View, the big story is just one fight down on the UFC 256 card, in the co-main event, where perennial contender Tony “El Cucuy” Ferguson squares off against Charles “Do Bronx” Oliveira, the UFC’s all-time leading submission artist. A bout made on just 20 days notice, between two of the lightweight division’s finest fighters, the Ferguson vs. Oliveira matchup is about as exciting a fight as anyone could ask for this Christmas, and the real gem of the UFC 256 experience.

Sure, Figueiredo, who is currently the frontrunner for 2020 MMA Fighter of the Year, is an impressive specimen. He’s mean and lean, with wicked power in his mitts and some crafty submission skills. No doubt he’ll have his hands full with Moreno, the UFC’s top ranked flyweight contender, who’s currently riding a four fight unbeaten streak in the Octagon, with a 6-2-1 overall record in the UFC.

It’s a fine fight. It really is. But, Figueiredo, and Moreno for that matter, just fought on Pay Per View a few weeks ago. So why do I need to shell out another $64.99 to see a couple dudes who just fought?

Don’t get me wrong, I dig the Figueiredo vs. Moreno fight. I really do. I can already envision Figueiredo landing heaps of nasty punches, pouring on the pressure, while Moreno, full of heart, swings wild after a scramble and makes it a frenetic firefight.

Moreno has just enough experience and possesses enough intangibles to threaten Figueiredo’s belt. But, if I’m throwing down sixty-five bones for three hours of PPV combat entertainment, I want something new, something exciting, something fresh. Tony Ferguson is all of those things, and more.

He’s also one of a select group UFC fighters that is always worth throwing down some hard-earned money for. Shit. Even in defeat he always delivers the action.

For MMA hardcores, diehards like myself, Tony Ferguson reached cult status years ago. In fact, there was a time, between 2014 and 2015 where I never missed a Tony Ferguson fight live. From Las Vegas and Sacramento, to LA and San Diego, I witnessed Ferguson’s mastery of mixed martial arts, along with his unique and irreplicable style, on five occasions, cageside, constantly impressed and amazed with his skill, his robust arsenal, heart, endurance, and craft. But more than anything, it was his creativity that stood out.

Tony Ferguson can literally do things that no one else on the planet can do, which is basically how the whole “Tony Ferguson is the type of guy” slogan began amongst hardcore fans. He’s just unlike anyone else on Earth. He’s an entirely different breed altogether.

Now, for the casual MMA fans out there, there’s some 700,000 of you or so who tuned in to watch Ferguson fight Justin Gaethje at UFC 249 in May for the interim lightweight championship. Were you not entertained?

Yes, “El Cucuy” lost that fight, but what a barnburner that was, eh? And remember, he took that fight for you, for the UFC, for America, and for the world, accepting a replacement opponent on short notice just to be the first headliner to bring live sports back at the beginning of the pandemic.

Talk about “Champ Shit Only.”

This fight on Saturday, the one at UFC 256, is different, however. It’s for Ferguson, and Ferguson alone, as he aims to get back on track and work his way to the undisputed title shot that still eludes him.

And, all of this is to say nothing about Ferguson’s opponent, Charles Oliveira, the UFC’s seventh-ranked lightweight, who just so happens to be on a seven fight win streak, with all seven victories coming by way of stoppage.

Still just 31, Oliveira has been fighting in the Octagon for over a decade, and it’s just now, 10 years into his UFC run, that he’s finally hit his stride, displaying peak form as he moves closer to a title shot.

Oliveira, who boasts the UFC’s all-time submission record with 14, also happens to own a piece of the promotion’s stoppage record at 16, which he shares with Donald “Cowboy” Cerrone. He’s also won 16 fight night bonuses for his exceptional work inside the Octagon, and, in all seriousness, he’s really just a few signature wins away from cementing his resume as Hall of Fame worthy. A win against Ferguson will certainly look good on that application.

Shoot, Ferguson’s Jiu Jitsu is so dynamic that he even has a signature move, the M’Arce, which is a modified version of the D’Arce choke. It’s been a while since we’ve seen that one, but there’s always a chance Ferguson will pull it out at UFC 256.

Seriously, it’s totally plausible that “El Cucuy” and “Do Bronx” wind up involved in some bloody exchange that instantaneously transitions from a boxing match into a grappling affair, and Ferguson employs his snap down wrestling technique to look for Oliveira’s neck. Then again, it’s also easy to imagine them both tangled up on the ground in a dizzying display of flexibility, dexterity, and creativity as they attempt to choke one another out, or perhaps even hyperextend a joint.

Who knows, Ferguson and Oliveira may even create a new move on fight night and pull off the world’s first dual triangle finish. With this pair of fighters, almost every technique known to MMA will potentially be on display at UFC 256, and that’s reason enough to tune in.

Overall, the UFC 256 Pay Per View main card on ESPN+ has some rather cool fights. Former heavyweight champ Junior Dos Santos takes on surging prospect Cyril Gane, an athletic and swift French kickboxer, to kick off the PPV. Next up is veteran middleweight Jacare Souza facing Kevin Holland, a fighter whose skills are rapidly catching up with his gift of trash talk, followed by a super competitive strawweight bout between Mackenzie Dern and Virna Jandiroba. It’s a fight card designed to appeal to the hardcore crowd; however, with Ferguson’s involvement, it’s just a little different.

Much like when he fought Donald Cerrone on short notice to give the UFC 238 card some brand name recognition, Ferguson is stepping up to boost the profile of the UFC 256 event. He’s an event in himself, honestly, so no matter what else happens on the UFC 256 PPV card, it’s safe to say that it will deliver, merely because of Tony Ferguson and his wild, unique fighting style.