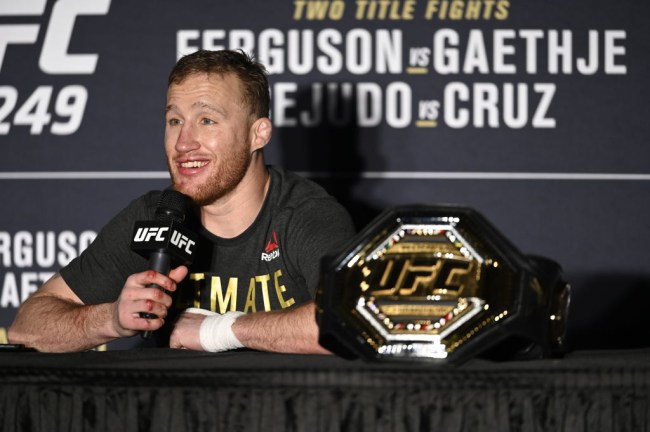 Sports are back, bro, and there’s no denying it.

With two more UFC fight cards set for the next five days, combat sports are leading the fight to put sports back in the arena, even if it’s empty. And, after last Saturday’s UFC 249 Pay Per View event, it’s clear that while major team sports will still need some time to adapt to occupancy limits in the post-COVID era, mixed martial arts has a natural advantage over its athletic counterparts, even if it’s just the sheer logistics of a one-on-one sport.

The return of American sports wasn’t just the byproduct of a technicality, however. This was always the plan according to UFC president Dana White, who never backed down from his intention to promote MMA fights while most of the country is on lockdown. Sure, there were definitely financial incentives to putting the fighters in the Octagon and putting those fights on live TV (and streaming), but UFC 249 was just as much about sports being an emblem for patriotism as it was about the bottom line.

Of course, it doesn’t hurt that a reported 700,000 viewers shelled out $64.99 for the Pay Per View portion of the card, according to Dana White, while roughly 1.58-million households tuned in to the UFC 249 prelims. The (reported) numbers prove what many expected. Americans are in dire need of live sports entertainment, any kind of action to ease their anxious minds. And, last Saturday, the UFC delivered that action in droves.

Sources tell me that ESPN+ logged north of 700,000 buys – a good result for Saturday’s UFC 249 PPV, according to early numbers. SBJ Media is live: 🔒https://t.co/BECw4DrHhe🔒

With a crude understanding of the history of UFC PPV sales, that 700,000 figure is rather significant. While it’s not in the same category as a Conor McGregor bout — his last six UFC fights, along with the historic Mayweather vs. McGregor boxing match, have all sold north of 1-million pay per views — those numbers are usually reserved for established MMA stars like Jon Jones, Georges St-Pierre, and Anderson Silva.

The numbers are even more impressive considering that Justin Gaethje, who won the interim lightweight title over Tony Ferguson at UFC 249 via fifth-round TKO, has never previously headlined a PPV card. Prior to UFC 249, Ferguson had only headlined one pay per view, which reportedly sold 200,000 units. It’s a major spike in numbers.

Sure, it’s impossible to ignore the fact that there have been no live sports for close to two months, so the fanbase was hungry for action. But many new MMA viewers also tuned in to UFC 249, taking a chance on a sport that they may not be familiar with. Now the question is, can the UFC retain those eyeballs for its next event, and convert these new fledgling fans into full-blown hardcores?

If the conversion is purely based on action, then UFC 249 definitely did its part to attract new viewers. Gaethje and Ferguson put on a spectacular fight, standing and trading brutal shots for almost 24 minutes. There was blood, there were fireworks, along with plenty of heavy hooks and snapping leg kicks. For my money, Ferguson vs. Gaethje was the second best fight of 2020 thus far, just behind the instant classic that Zhang Weili and Joanna Jędrzejczyk put on at UFC 248.

In the co-main event, bantamweight champ and Olympic gold medalist Henry Cejudo defended his title with a second round TKO over Dominick Cruz. Yes, the stoppage was a bit early, and Cruz protested. However, Cejudo looked every part the champ, leveling Cruz with a perfectly timed knee to the jaw, following up with heavy ground-and-pound. Cejudo then went on to retire inside the Octagon, but we all know how retirements go in combat sports. Heck, even Mike Tyson, who hasn’t fought professionally since 2005 is currently teasing a comeback.

While Tyson ruled boxing’s heavyweight division in the eighties, MMA heavyweights are a different breed. And, while Tyson was able to put away men much larger than his 5’10” frame, he may not have had a chance against UFC heavyweight contender Francis Ngannou, who thrashed Jairzinho Rozenstruik in just 20 seconds.

Fights that short often leave viewers with an uneasy feeling; it ended too quickly to become invested in the ebb and flow of the battle. However, the fight also demonstrated Ngannou’s sheer power and athleticism. He’s a true force of nature, and will likely fight for some version of the UFC title in his next bout.

Now, I must admit, I did not pick Ngannou in the fight. I took a calculated risk and picked Rozenstruik because he provided better value and action at the sportsbook. That’s called betting with your head, and not your heart.

And, although my brain clouded my judgment in this heavyweight affair, a few of those other calculated risks paid off. Wait, you haven’t been reading BroBible for UFC betting picks and recommendations?

Looking back at UFC 249, there were many fights that cashed out for anyone who followed along at the sportsbook.

Calvin Kattar blasted Jeremy Stephens with a second round TKO over Jeremy Stephens. Kattar displayed crisp and technical boxing, mixing in a well-timed and deceptive elbow to drop Stephens. He also completed a four-fight parlay with the likes of Anthony Pettis, Carla Esparza, and Ryan Spann, that we outlined heading into fight night.

Aleksei Oleinik also pulled the upset over Fabricio Werdum, so I guess it really is important to follow BroBible on fight week.

Clearly UFC 249 wasn’t all about gambling, and it wasn’t all about the Coronavirus either, but somehow POTUS 45 still made his way onto the broadcast, which wasn’t that surprising given Dana White’s relationship with the President. No doubt, it was certainly a polarizing moment, but at an event like UFC 249, it was impossible to just stick to sports. Sports has long since been at the cross section of culture and entertainment, and on this night, these mixed martial arts fights represented the first litmus test on how live sports can return to action.

While the event featured excellent fights and some of the best talent on the UFC roster today, it wasn’t all perfect. One fighter, Jacare Souza, along with his team, was diagnosed with COVID-19 on the eve of fight night. Souza’s middleweight bout against Uriah Hall was immediately cancelled, and the rhetoric immediately shifted, explaining that this was proof that the UFC’s COVID testing regimen was working. It’s a strange way to spin the information, but it’s not wrong either.

And just like that, we are on to the next event. 22 fighters weighed in this morning for tomorrow’s event headlined by light heavyweights Anthony Smith and Glover Teixeira, and another 22 are en route to Jacksonville, Florida for fight night card this Saturday, May 16. From there, it’s back to a somewhat regular schedule of fights. Well, if you consider “Fight Island” regular.

As the country takes the next few weeks and months to slowly open up various sectors of industry, helping to return some sense of “normalcy” to American life, we’ll all be searching for traces of the life and culture that we left behind pre-COVID.

Sure, some of our habits, practices, activities, and responsibilities will return to near normal, but many things won’t come back so quickly, among them attending live sports and entertainment events. Those are things that will just have to wait; however, the UFC has demonstrated that their new alternative can result in equally impressive fight cards, with fantastic matchups, and jaw-dropping results. Hope you’re enjoying this return of sports.