Dana White Says ‘Fight Island’ Will Be Ready In June, Hints It May Host McGregor Vs. Masvidal Megafight 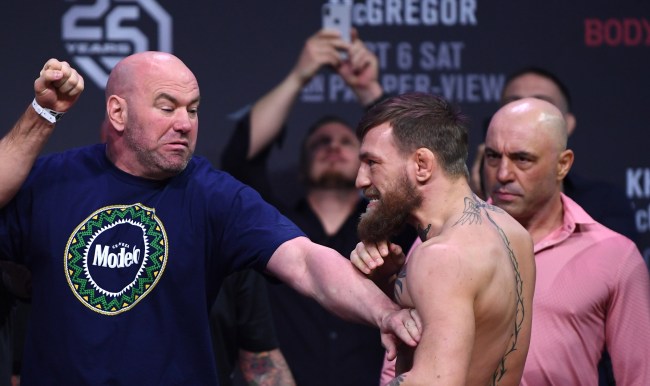 UFC president Dana White made an appearance on The Jim Rome Show on Tuesday to promote UFC 249 taking place this coming weekend and he covered a slew of topics during his interview.

Among those topics was the infamous “Fight Island” he says he is creating for to hold UFC events.

White doubled down on his statement that Fight Island will be ready to hold UFC bouts in June.

“The infrastructure is being built right now,” White told Rome. “I’m hoping that it will all be done mid-June. Hopefully we’ll be able to have a fight that weekend that it opens, or maybe closer toward the end of June. What we’re building that for is that I can’t predict what tomorrow might bring with this coronavirus, so the hardest thing is going to be getting people in from the United States. This is where we’re going to do all our international fights.”

In addition to that news, White added that he was looking to possibly have Fight Island host a one-off Conor McGregor vs. Jorge Masvidal megafight where surely the BMF belt will be on the line.

“Conor’s been ready to fight for a while,” said White. “He’s in shape. He’s ready to go. First of all, Fight Island is going to be very important in any of these fights that are happening with people from outside the country. It kills me to do a fight with Conor without fans. Kills me. This guy’s doing almost $20 million gates.”

White also made the media rounds with Sports Illustrated and addressed critics who have been accusing him and the UFC of corporate greed for holding events before any other professional sports league.

“I’m not doing this because I need the money. I haven’t laid off one employee. Everybody is getting paid. Fighters that were supposed to fight: If they didn’t get their fight, they’re getting some money, too. It isn’t like we’re about to go bankrupt over here, and if I don’t pull off this fight on May 9 we’re f***ed.”

Among those who have been vocal in their criticism of White and the UFC is Top Rank Boxing CEO Bob Arum who recently told BoxingScene.com, “We’re not gonna be cowboys, like Dana White. I don’t wanna get politics involved, but I have really very little respect for Dana and what he’s doing.”

When asked about Arum’s comments on the latest edition of the UFC Unfiltered podcast, White, as usual, held little back in his response.

“Listen, I think by now everybody realizes that Bob Arum is a d**khead,” said White. “This guy has been talking s**t about the UFC and me for 20 years. He’s f***ing bankrupt this guy. He’s bankrupt. Of course you don’t want to put fights on. You can’t afford to put fights on you f***ing jackoff. You’ve been in this thing your whole life and have completely destroyed the business and the sport. Congratulations, Bob Arum. You’re brilliant.”

But… can you tell us how you really feel about all of this, Dana?