Were We All Just Deprived Of Sports Or Was The UFC 249 Main Event One Of The Most Impressive Fights Ever? 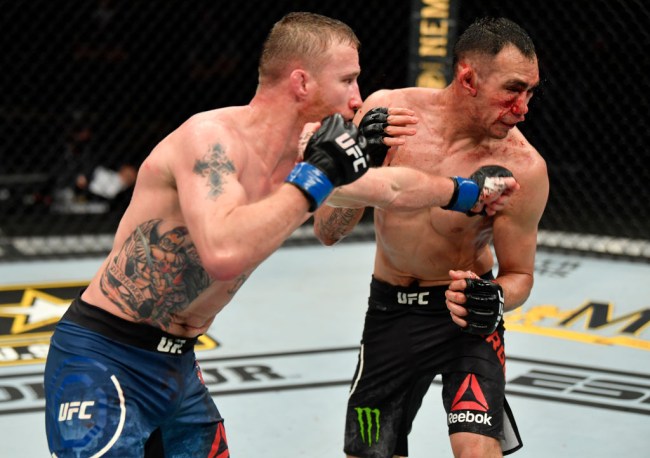 If you were not that big of a UFC fan, you had no choice but to be one Saturday night for UFC 249. The only true sporting event that has aired in months caused UFC 249 in Jacksonville, FL to be treated like the Super Bowl. As the underdog Justin Gaethje put current champion Tony Ferguson away I was left to wonder, ‘is this my mind just being deprived of sports or was that one of the most impressive fights I have ever witnessed?’

Why so impressive you ask? It wasn’t the uncertainty of who would win, anybody in their right mind would know Gaethje controlled that whole fight, but it was the shots that Ferguson was able to take that blew me away. How is one man capable of taking punch after punch to the face able to keep coming back for more? Joe Rogan, who was commentating the fight, warned viewers before that this man is a machine and will not go down lightly, and he wasn’t wrong. If the ref had not stopped the fight with a little over a minute remaining in the final round, there was no chance Ferguson would have gone down on his own.

Hopefully, anyone reading this has already eaten their breakfast before they look at this picture of Ferguson recovering in the hospital the next day with a broken eye socket because if not, you most likely just lost your appetite.

I truly did not know that a broken eye socket was even an official medical diagnosis until now. Again, maybe my mind has just been deprived of sports and I would have been fascinated by any sport you showed me, but Ferguson is built out of iron and nothing can convince me otherwise.

Doctors claim it takes a year to come back from a broken eye socket, my money is on Ferguson being back in two months and training by tomorrow.