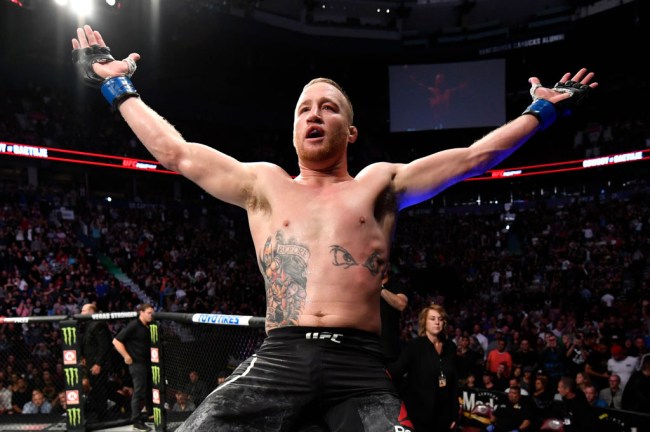 Rule number one: There are no sure things in the fight game.

Now that we have that out of the way, it’s time to take a look at the odds for UFC 249 because the May 9 Pay Per View card is not only the first major sporting event in North America since the Coronavirus pandemic began, but it will also be the first opportunity to bet on sports. And seriously, what better way to justify weeks in quarantine than winning heaps of cash on legal sports betting. Who knows, you might win big … or at least enough to afford a new pair of sweatpants after wearing yours threadbare these last few weeks.

Even the most novice bettors should know that there’s no way the UFC 249 main event between Tony Ferguson and Justin Gaethje will go the distance. It’s not a bet with great odds (-550), but it’s probably the most certain outcome of any bet on the fight card. Like, seriously, with the way Ferguson and Gaethje throw kicks, punches, elbows, and knees, how can anyone possibly imagine that these two warriors can absorb 25 minutes of damage.

Understanding that this bet doesn’t have great action, there’s also the option to pick a winner flat out, but that’s a much riskier bet. Ferguson will enter the Octagon at UFC 249 as a -195 favorite to Gaethje’s +160 underdog. Both fighters have clear and violent paths to victory, and their skill sets are so well rounded and honed that it’s tough to put money on either one. It’s just too close for my wallet.

However, just before the UFC 249 main event, there are some decent odds on Dominick Cruz, who will challenge Henry Cejudo (-230) for the UFC bantamweight title. With Cruz listed around a +185 underdog, it’s a risky bet, but then again, that is kind of the point.

Sure, Cejudo is the hotter fighter at the moment, having won his last five fights, but Cruz has loads of championship experience, and given his matador style and size advantage, it’s very possible that he stifles and stymies Cejudo throughout their fight.

Cruz isn’t the only underdog worth checking out on the UFC 249 card. Fighters like Jairzinho Rozenstruik, Aleksei Oleinik, and Niko Price all present intriguing betting options come fight night. But these bets are not for the faint of heart. These are wagers for anyone looking to actually win money betting on UFC 249.

There’s no sugar coating it. All three of these picks are long shots, but bear with me here.

Rozenstruik, who faces Francis Ngannou at UFC 249, is currently listed at around +250, which is some fairly decent action. Sure, Ngannou (-275) is taller, longer, and his power is more well documented, but the undefeated Rozenstruik is a high-level kickboxer who routinely concedes size to his opponents and still manages to find his way inside and land big shots. He also has immense and effortless power.

Oleinik is another underdog worth checking out, and he’s probably as unpopular a pick as Rozenstruik because of the level of the opposition. However, Oleinik, a +240 underdog, is facing Fabricio Werdum (-330), a fighter who is coming off a two-year layoff. It’s definitely a mere hunch, but Oleinik’s a fun play who can pay out. Don’t quote me on this one though. You’ve been adequately warned.

At UFC 249, Price is facing the always game Vicente Luque (-320), and if there was a way to bet on the UFC 249 Fight of the Night this would probably be my pick. However, I’m taking Price to win, even though he already has a loss against Luque. There’s no rhyme or reason to this pick, but we’re trying to win money here, and the way to do that is to seek out the underdogs and the action, and take some calculated risk.

Now, picking underdogs with long odds isn’t the only way to make money betting on UFC 249. Another tried-and-true method is the popular parlay bet, where gamblers will pick a sequence of winners and the winnings are carried over to the next bet. It’s definitely a gamble to select a handful of consecutive winners, but it’s also a great way to stack favorites and increase the odds.

For UFC 249, I’m looking at a number of undercard fighters to provide good value in the parlay format.

Heavily favored light heavyweight Ryan Spann (-450) is a bright prospect with size and power. He’s the biggest favorite on the card for a reason, and he might be a good play to kick off UFC 249 with a win at the sportsbook.

A few fights later, former UFC strawweight champion Carla Esparza (-155) is a strong candidate to cover the odds in her fight against Michelle Waterson (+125), using her wrestling advantage to pick up a win. And, headlining the prelims, Anthony “Showtime” Pettis (-150) also has some value on the tail end of this parlay.

Pettis is facing Donald “Cowboy” Cerrone (+120), an experienced veteran with some crafty submission skills, but this fight is bound to play out on the feet, where “Showtime” can do some serious damage.

Now, the Spann, Esparza, Pettis parlay is a good play with reasonable value; however, if you’re looking to push your luck even further, take a look at Calvin Kattar (-250), who’s fighting Jeremy Stephens (+200) on the UFC 249 PPV main card on ESPN+.

While Stephens is the far more experienced fighter, Kattar is a fighter on the rise with slick boxing, along with a reach advantage that he knows how to use.

In the past, Stephens has struggled with longer opponents who can keep him on the outside, and Kattar has the jab to control the distance.

When it comes to betting at the sportsbook, there’s no right or wrong way to do it, other than winning and losing. If you win, you’re doing it right, and if you’re not, then you’re not. However, the only way to win is to play, so feel free to consider other bets.

Perhaps you just want to wager on your favorite fighter or fight of the night, but it’s also fun to start thinking about these picks with some sort of rationale. It can actually make you feel more invested in the fight and the viewing experience, as well as increase your understanding of why certain fighters have certain advantages.

So, to recap, these are the bets I’m placing at UFC 249. As per usual, my Venmo is open for any tips or gratuity if these bets cash out on May 9.