5 Days Until UFC 249: How Long Can Francis Ngannou and Jairzinho Rozenstruik Punch Each Other in the Face? 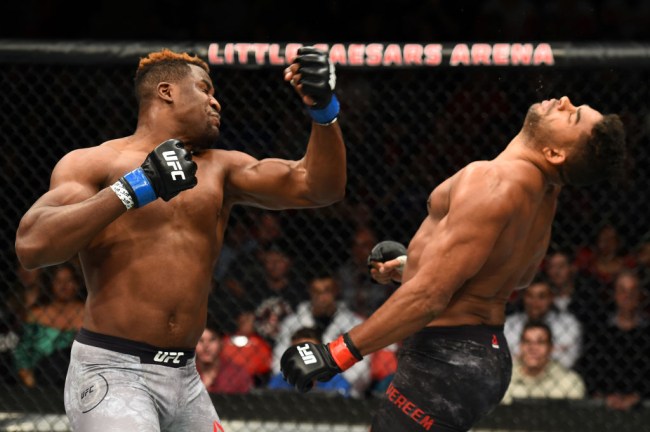 It’s kind of tough to summarize what the return of live sports, even without a crowd in attendance, will mean to sports fans around the globe, so I won’t even attempt to approach such a massive subject. Instead, I’ll attempt to approach two massive subjects: Francis Ngannou and Jairzinho Rozenstruik; a pair of hard-hitting heavyweights who will throw down on the UFC 249 PPV main card. It’s one hell of a fight, and it may only last a few seconds.

Booked right before the UFC 249 co-main event between bantamweight champion Henry Cejudo and challenger Dominick Cruz, the Ngannou vs. Rozenstruik matchup is a big time fight on a big time fight card. It’s a battle of top-10 heavyweights, both of whom are nearing a title shot, and there are major stakes, implications, and even consequences in this one.

Ngannou and Rozenstruik are two of the heaviest hitters in the UFC, a fact that is verifiable when taking a closer look at their records and careers. And, of the two, Ngannou is the more established name.

Debuting with the UFC in 2015, Ngannou finished his first six opponents inside the Octagon, helping the Cameroon-born French national secure his first UFC title shot. The title fight didn’t go Ngannou’s way though. In fact, he got completely dominated by champion Stipe Miocic in January 2018. A subsequent loss dropped Ngannou’s stock to a career low; however, defeat only helped fuel Ngannou’s current career resurgence, which includes a new knockout streak that is up to three in a row.

Rozenstruik, who is undefeated at 10-0, is a newer face in the world of mixed martial arts, having only debuted in the UFC in 2019. But, man did he make the most out of his rookie campaign, knocking out all four of the opponents he faced inside the Octagon.

These resumes are fun to examine, especially when considering that both Ngannou and Rozenstruik have knockout wins over big names like Alistair Overeem and Andrei Arlovski, but the real excitement will come on fight night, May 9, when these two behemoths will trade punches at UFC 249.

Ngannou and Rozenstruik are perfect characters for mixed martial arts. Both are giant, intimidating, and rather quiet. And even moreso, both Ngannou and Rozenstruik have that effortless touch-of-death type power, where all they really need to do is touch the other’s chin or temple and the fight will probably be over.

Sure, there is some comfort in knowing that, if necessary, both Ngannou and Rozenstruik can go the full 15 minutes at UFC 249, but what fans really crave is the knockout, and in that regard Ngannou and Rozenstruik amount to a ginormous combat sports thirst trap, setting up knockout punches with feints and parries in the pocket.

See, this fight is not like other fights. There’s really no need to overanalyze much in regards to wrestling and jiu jitsu. Kicks aren’t completely obsolete here because Rozenstruik, a native of Suriname, has very high level Dutch kickboxing, but what everyone is looking out for here is the boxing, with the fists, and the punching in the face.

Ngannou does have a height and reach advantage, which can help keep Rozenstruik at bay, looking for ways to move inside. However, conceding a few inches of height and reach has never stopped Rozenstruik before, like the time he effortlessly flatlined Arlovski at UFC 244. He just makes it look so easy.

Ngannou will certainly be a different type of beast for Rozenstruik, who has yet to face a fighter in their prime inside the Octagon. Ngannou’s experience edge could prove quite pivotal here, as he’s been inside the Octagon with the best in the world, among them four current or former UFC champions, but Rozenstruik is also in his prime, and we’ve never seen Ngannou deal with the adversity from taking a big punch (Miocic owned him on the ground when they fought at UFC 220, but never wobbled or rocked Ngannou on the feet).

Let’s just hope Ngannou and Rozenstruik don’t use this as an opportunity to show us the new ground games they’ve been working on in quarantine.