3 Days Until UFC 249: How will the Donald Cerrone vs. Anthony Pettis Rematch Differ from their First Bout? 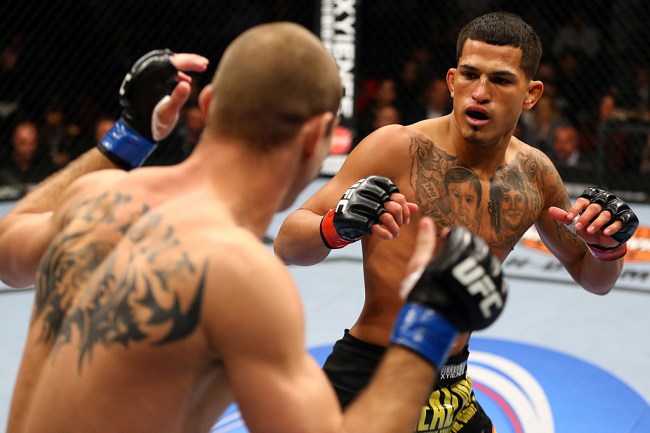 Seriously, when was the last time the UFC produced an official promo video for the seventh fight on the card? Never. That’s when.

However, the long-awaited rematch between Donald “Cowboy” Cerrone and Anthony “Showtime” Pettis, which goes down at UFC 249 on May 9, is such a smoking-hot fight that the promotion couldn’t resist producing some high-quality content for the occasion. They just couldn’t.

Simply put, it’s a sexy fight between two of the bigger names in the UFC. However, while this Cerrone vs. Pettis rematch is shaping up to be a fan favorite, the major difference this time around is that “Cowboy” and “Showtime” are bumping up to welterweight for UFC 249.

So, how will the extra weight change the outcome of the fight?

With both Cerrone and Pettis recently competing, and losing, at UFC 246, it’s important to understand that these are not the same fighters who faced each other in 2013. They’re both legends, but time has definitely affected the viability of both men.

While Pettis smashed Cerrone with a first round body kick in the previous fight, he’s been up and down in the years since. Sure, Pettis won the UFC lightweight title a few months after the Cerrone fight, but he’s also gone 6-8 since their last encounter.

Cerrone has had a similar pattern of ups and downs in the last seven years. And while he fought for the lightweight title in 2015 after amassing an eight fight win streak, he’s lost three straight bouts by knockout, including a 40 second drubbing at the hands, feet, and shoulders of Conor McGregor.

None of this is to say that Cerrone and Pettis are washed up. Both of them still have plenty of gas left in the tank and the fire to compete, but neither will likely ever fight for a UFC title again. So why the big deal about their bout on the UFC 249 prelims on ESPN+?

Well, first of all, whenever two legends square off inside the Octagon, it’s essential viewing. But secondly, and more importantly, Cerrone and Pettis are fighting at welterweight this time around, and that extra 15 pounds can have a major implication on how the fight plays out.

An extra 15 pounds means a lot on fight night. It means that Cerrone won’t be drained from a massive weight cut. It means that Pettis will have even more power in his punches. It may mean a slower pace fight as well, but when Cerrone and Pettis get started with their flashy kickboxing and taekwondo skills, they fire off with speed and accuracy. It’s a combination that can dazzle viewers, as Cerrone and Pettis are known for defying gravity and human physiology with their command and control.

Taking a look at the careers of “Cowboy” Cerrone and “Showtime” Pettis, it’s essential to look at their performances at welterweight, a division where both fighters have competed on occasion. And, of the two, Cerrone has the experience edge — in fact, he has an experience edge over everyone — having previously competed at welterweight on 11 occasions. Pettis has two previous bouts at 170 pounds, and both are rather telling.

Making his welterweight debut in 2019 against Stephen “Wonderboy” Thompson, Pettis stormed into the welterweight rankings with a thunderous Superman punch off the fence. Connecting perfectly against Thompson’s jaw, Pettis scored the knockout in under two rounds, and suddenly the entire MMA community was convinced that there was a new player at 170 pounds. However, in his next fight, Pettis looked flat and was nearly finished by a better conditioned Nate Diaz at UFC 241.

Returning to lightweight in 2020, Pettis admitted that the move to welterweight was temporary, and that he was just taking a year off of cutting weight. But, given the short-notice circumstances of UFC 249 in the Coronavirus-quarantine era, he opted to forgo the weight cut and face Cerrone at 170 pounds.

At welterweight, Cerrone has been a mixed bag.

Moving up to 170 pounds in 2016, “Cowboy” rattled off four straight finishes in the welterweight division, including a picturesque combo to stop Rick Story at UFC 202 and a perfect head kick to knock out Matt Brown at UFC 206. He was charging up the rankings, winning bonuses at ease, and looking like a real player in the division.

And then he hit his ceiling, so to speak.

Losing his next three fights to bigger and stronger opponents, it became clear that there was a limit to Cerrone’s viability at welterweight, where wrestling (both offensive and defensive) can impact the fight even more. And, after three more fights at 170 pounds, Cerrone made the move back down to lightweight before facing McGregor at welterweight at UFC 246.

At welterweight, we’ve seen some of the best and worst moments for both Cerrone and Pettis. They’ve both proven that they can hang with bigger fighters, but when facing the elites, they don’t necessarily have the size to outmuscle natural welterweights.

However, rather than fighting bigger opponents, they circled back to one another, this time opting to square off at a higher weight, which offers so many intriguing possibilities.

How much heavier will Pettis’ punches be this time around? Will Cerrone’s experience at welterweight prove to be too much? Can “Showtime” still rattle off spinning kicks with the same speed at 170 pounds? How will Cerrone’s wrestling impact the fight?

Additionally, both Cerrone and Pettis, who are born finishers, have two of the more well rounded games in mixed martial arts. They can strike with the best of them, but they both have impressive ground games, with Cerrone recording six submissions inside the Octagon to Pettis’ four. So will this play out on the feet, or will “Cowboy” and “Showtime” take the fight to the mat?

Your guess is as good as mine, honestly. But what’s not left to chance is the certainty that this is a fight to watch, and essential viewing for hardcore MMA fans and casuals alike.

Donald Cerrone fights Anthony Pettis at UFC 249 on May 9. The action goes down on ESPN+ and ESPN+ PPV.