4 Days Until UFC 249: Why Carla Esparza Decided to Fight During the COVID Pandemic 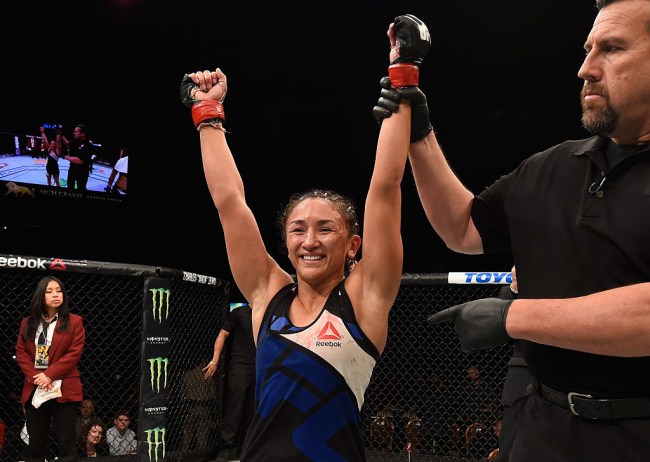 It was sometime around April 9 when UFC strawweight Carla Esparza found herself face-to-face with one of combat sports’ most challenging and scariest opponents: a smorgasbord of cheesecake.

Having just found out that her upcoming fight with Michelle Waterson had been postponed, and then cancelled, Esparza, a former UFC champion and Octagon veteran, caved to the sweet and sugary flavors of the rich and creamy desserts. It was her only slip up during an epic 14-week fight camp that was extended by an additional three weeks when the UFC decided to reschedule Esparza and Waterson on this weekend’s UFC 249 card.

“The only time where I was stressed out was when I was hearing the fights were cancelled … I kept having hope that they were gonna happen and that was the day that I just mentally gave up and just went to Cheesecake Factory and I got like four plates of food and cakes and stuff and I was just like ‘whatever’ and I took a couple days off,” explained Esparza in an exclusive interview with BroBible.

“I think like three days later [UFC] let us know about the upcoming fights that are happening on May 9, so it was a short-lived kind of binge-fest … I didn’t have too much lag time in between. But I did a little bit of damage for sure.”

Returning to Team Oyama, her gym in Orange County, California, just a few days later, Esparza reignited her fire to compete. And despite the global Coronavirus pandemic, the opportunity to fight at UFC 249, which is being billed as the biggest fight card of the year, was too lucrative to pass up.

“I’ve had torn ligaments, broken bones, busted this, broken nose, this and that,” commented Esparza, who’s already arrived in Jacksonville, Florida for her fight on May 9. “To me, if the risk of getting sick is one of them, I’m still game. I love this sport … we take a lot of risk stepping into the cage every time. And we do it knowingly because we love it.”

Understanding that fighters have a different mentality than other athletes — the will to compete in uncomfortable scenarios and face adversity tends to separate fighters from team-sports athletes — Esparza is adamant that she is not worried about COVID and that the pandemic did little to affect her fight camp.

With her training partners all sharing a house (Esparza lives separately from the team), she mentioned that everyone at Team Oyama was under strict orders to only travel to and from the gym. When groceries were needed, only one teammate would travel to procure rations.

“We got to be careful: hand sanitizer, washing hands, the whole deal; so I think everyone’s been pretty responsible,” added Esparza, who reiterated the word “responsible” several times during the interview. “For me it’s pretty low risk. I trust the people I’m training with. Anything can happen, but I’m not too worried.”

Trust is a major factor in Esparza’s decision to fight at UFC 249 on May 9. And, while it may be difficult for outsiders to understand the mindset of simply trusting your boss and colleagues to do the right thing — even Esparza’s friends questioned her decision to fight during the pandemic — Carla never wavered on her intention to face Waterson. She also never doubted the UFC and president Dana White.

In fact, given her near six years with the UFC, Esparza was comforted by the promotion’s efforts to put on a safe event, despite a worldwide viral outbreak.

“It kind of reminds me about the beginning of the UFC, outlawed in 49 states and it just kept pushing, kept pushing to make this happen when a lot of people didn’t think it would,” stated Esparza. “I have so much respect for the perseverance and just the grit that Dana’s been using to make this happen … Dana told us ‘anybody who doesn’t feel comfortable, you are not pressured to fight at all. You can sit this out until you feel comfortable again.’ So, I like the idea of people having the choices to kind of just do what they feel is right, and I’m not too concerned with everything as long as we’re all being responsible.”

Still, there were quite a few blanks to fill in en route to fight week …

With the UFC recently circulating a memo regarding on-site COVID testing for all fighters, cornermen, and event staff, there still was some uncertainty about the protocol for UFC 249 as recently as last week.

Fight in an empty arena three weeks after your original fight was postponed? Sure. Test for a deadly virus sweeping the globe? We’ll let you know … eventually.

“Honestly, they haven’t really given us too many details, it’s more just been everything’s gonna be pretty much like normal, except more safety precautions,” stated Esparza just last week. “I had heard rumors … we were gonna be mailed COVID tests and this and that, but as far as this upcoming event, we haven’t really been given too many details at all … we haven’t gotten those details yet. I think Dana kind of plans to keep everything pretty hush hush up until the event because people talk.”

Of course, we now know that the UFC is testing it’s fighters for the Coronavirus, along with antibodies, and taking every imaginable precaution; however, 10 days prior to fight night, Esparza was still in the dark.

And yet, she was not bothered by the lack of information.

“This fight is huge in a lot of ways,” added Esparza. “I think because it’s the first one back, people are gonna be hungry for it, and I’m excited to put on a show for everybody because it’s been rough out there.”

Understanding that her participation on a monumental card like UFC 249 is more than just another fight, Esparza realizes that this event is, in some way, a symbol of hope for MMA fans around the world, struggling with life in self-quarantine. And, she is now a beacon of that hope, bravely prepared to enter the Octagon to give the world an important and necessary dose of live sports action during this crisis.

“As fighters we knowingly take a risk every time we step in that cage, and this is always our choice,” commented Esparza. “Regardless of what people’s opinions are, the UFC is giving us another choice. To me, that’s what this country is about, the freedom to make our own choices.”