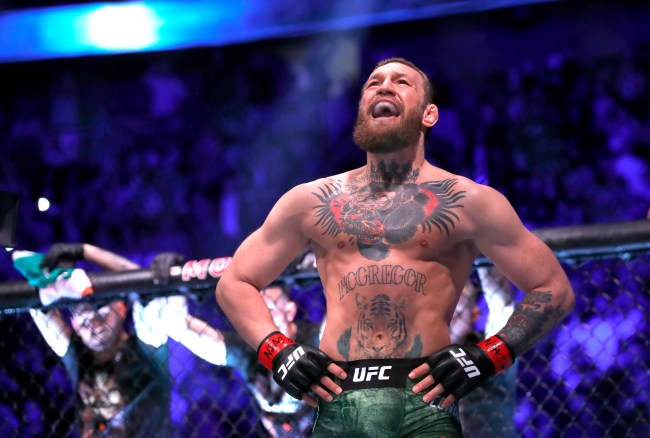 It looks Conor McGregor wants to get back in the Octagon and fight high-level competition before fighting Khabib Nurmagomedov later this year.

Last month Nurmagomedov was forced to pull out of his fight against Tony Ferguson after getting stuck in Russia due to the country’s lockdown.

Justin Gaethje went on to replace Nurmagomedov at UFC 249 and absolutely demolished Ferguson over the weekend to win the interim lightweight championship.

On Monday, McGregor said that he was wanted to fight Gaethje next as Nurmagomedov is currently taking a religious break from MMA due to Ramadan.

The fans make the sport!
Watching the other night I was against going in without them. But it will be my fucking pleasure to display the power I possess with zero background noise for them.
Its me and Justin next as khabib is the biggest bottle fighter in the game.
Guarantee it.

Justin, there is no danger in a man that hugs legs, we all know. Try and dance around what the real threat is here all you want.
I am going to fucking butcher you.
Your teeth. I’m going to put them on a fucking necklace.
Speak on my skills as a father?
You are fucking dead.

McGregor had some harsh words for Khabib in his rant.

Khabib you absolute embarrassment. Scurrying, hiding rat as usual. As I have said many times. As has been seen many times. Through the pane of glass it was confirmed what was always known.
“No comment” lol.
An embarrassment to real fighting.

Don’t ever say you represent the great nation of the United States of America ever again. No true American would speak so highly of, or allow, a convicted member of a Jihadi terror cell represent them.
Never Forget!
You are a fucking blind fool, and I am going to finish the job.

The Irishman went on to say that he’s ready to move up to 170 pounds once he beats Gaethje and Khabib.

After this division demolition job.
It is 170lbs.

Update: Ali Abdelaziz, who represents both Gaethje and Khabib says that McGregor can wait because he chose not to fight Gaethje in January.

Justin Gaethje's manager Ali Abdelaziz on Conor McGregor calling to fight Justin: "He had his chance for that, and he picked Cowboy [in January]. He picked the easier fight. The two kings of the division are going to fight in Khabib and Justin. Conor can be the co-main event."