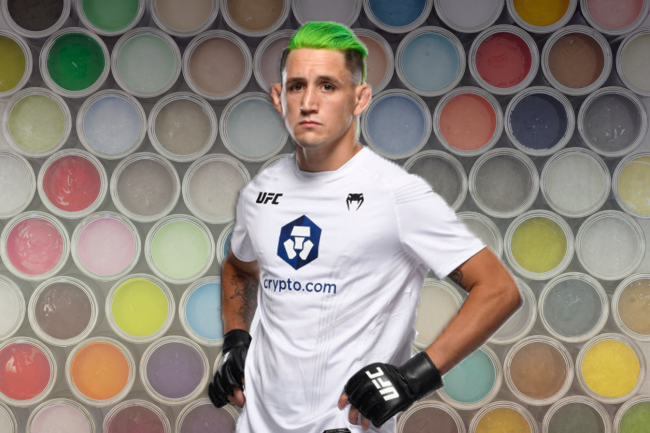 Kris Moutinho’s goal in life is to do something that he loves. He recently quit his job to pursue his passion of Mixed Martial Arts and it is already paying off.

As of last month, the 28-year-old was working 80 hours a week in a paint factory. On Saturday, ahead of the Conor McGregor and Dustin Poirier trilogy, he will make his UFC debut against “Sugar Sean” O’Malley, one of the most exciting fighters in the promotion.

It’s a big stage to make his first start. Win or lose, Moutinho is ready for the opportunity and couldn’t be more grateful to be where he is.

Moutinho was not originally on the UFC 264 card. O’Malley was scheduled to fight Louis Smolka, but Smolka had to withdrawal because of staph infection.

Smolka’s decision came on June 29, just 11 days before the bout.

In his place, the decision to tap Moutinho was met with criticism. A number of established fighters at 135 pounds offered to step in, but the O’Malley camp and the UFC chose a rookie.

Moutinho is 9-4 with three KO/TKO in his professional career. He stands 5-foot-7, 135-pounds and won his last two bouts by second-round stoppage.

Speaking with media ahead of UFC 264, Moutinho told his story. As of June, the Massachusetts-native was running a line at a paint factory.

He was working 80-hour weeks and fighting on the side. One day, he decided that enough is enough and set out to make a career through MMA.

When Smolka dropped out, Moutiho’s coach suggested that he make himself an option— just in case. It couldn’t hurt.

One thing led to another and now he’s fighting on the biggest card in 2021.

“It was a surprise to me as well. I’m just as thrown as a loop as you guys. So it’s crazy. I love it,” Moutinho said. “My coach, when the sweepstakes came out, the Sean O’Malley sweepstakes, he was like, ‘It’s a long shot, man, you want to just throw your name in? And I was like, ‘Why not? Yeah, let’s do it. Couple days went by, wasn’t hearing anything, I was like, eh, probably not gonna happen. Then he was like, ‘OK, you made it past the first round, man. They took your name. They’re gonna look at it,”

Moutinho also shared that he found out he was chosen through social media before the UFC called him to tell him the news.

“Within 15 minutes, I was getting DMs from random people telling me I’m gonna get knocked out and get beat up,” he said. “And I was like, ‘Oh, man, what are you guys talking about?’ Five minutes after that, he called me back and was like, ‘Yeah, man. We got it. Just get ready, cut the weight, and let’s go show the world who I am.’”

If Moutinho wins, the world is on notice. It would be an incredible upset.

On the other side of the bout, O’Malley has everything to lose.

“A lot of people think it’s a lose-lose for me,” O’Malley said. “I make a lot of money to go out there and knock the guy (out). This guy’s tough. I watched one of his fights this morning and he’s not just a scrub. […] He’s beat a couple dudes in the UFC. […] So he comes in there, he shocks the world, it’s a huge fight for him. Props to him for stepping up to take it.”

Moutinho wasn’t the big-name that O’Malley hoped to defeat on the biggest card of the year, so now he has to chase the highlight knockout.

Sugar Sean is no stranger to showmanship.

Even though O’Malley was respectful of his opponent, he has plans to “change his career.”

“He might go in there thinking it’s a win-win for him,” he said. “He goes out there and loses, he’s in the UFC. But I don’t just knock people out. I change people’s careers. Mentally, the way I knock people out, they step into that cage and they’re different the next time they get out there. So it could be the beginning of his career or it could be the end of his career. We’ll see.”

In the press conference ahead of UFC 264, O’Malley called a second-round knockout.

O’Malley and Moutinho are the first fight of the UFC 264 main card.

HERE IS HOW TO WATCH!

—
The BroBible team writes about things that we think you want. Occasionally, we write about items that are a part of one of our affiliate partnerships and we will get a percentage of the revenue from sales.