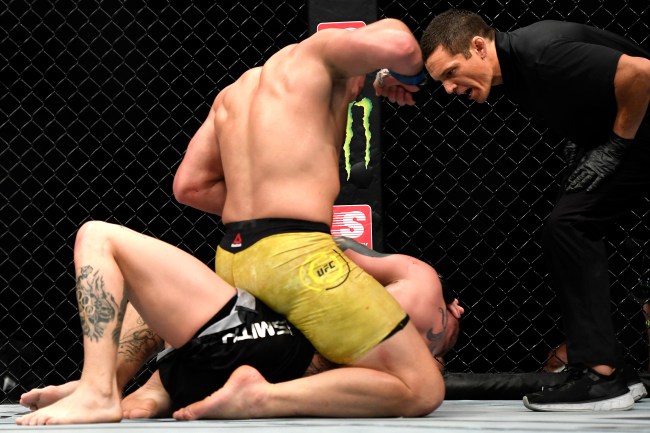 We have often said, rightfully so, that hockey players are a different breed based on the number of times they just shrug off injuries that would have had the rest of us mere mortals laid up for weeks.

The same can be said about mixed martial artists.

This was more than proven Wednesday night during UFC Fight Night by Anthony Smith during his fight with Glover Teixeira.

Smith, who took a massive beating and lost by TKO in the fifth round, at one point in the fourth round lost a couple of teeth, so he picked them up and handed them to referee Jason Herzog.

That alone is pretty crazy, but what makes it even more insane is that Smith did that with Teixeira on his back raining down blows on his head.

As Smith was grabbing his teethe and handing them to the referee while being beatdown by Teixeira, Glover actually apologized, telling Smith, “Sorry, Anthony, it’s part of the job.”

To which Smith replied, “Yeah. It is what it is.”

"Sorry Anthony, it's part of the job."

Glover Teixeira politely apologised for beating down on Anthony Smith… during their fight! 😳😅 #UFCJax pic.twitter.com/catPf8V2TR

Dana White said he was shocked Anthony Smith came out for the 5th round. He also added that he was handing the ref his teeth (which was put in his pocket) #UFCJax pic.twitter.com/QeHBboAccj

Injuries suffered tonight: Broken nose, broken orbital bone, two missing teeth and a cut under his right eye. One tooth in front and one towards the back, he said. His real teeth.

Needless to say, there were many who were watching that thought perhaps the fight should have been stopped a little sooner than it was. You know, because Smith’s teeth were falling out of his head.

Yeah. Great commentating by Paul Felder. Listen to your fighter. Anthony Smith looked defeated in the corner. Not, 'in need of a pep talk' defeated. Like, gone. Stop the fight for him.

Anthony Smith needs a new corner for not stopping that absolute beat down he received for 3 rounds straight and that ref needs fired for letting it go on that long, damn that was rough to watch. Dudes gonna have lasting damage for awhile because of that

Anthony Smith: "My teeth are falling out." How does he go back out for five more minutes of that??