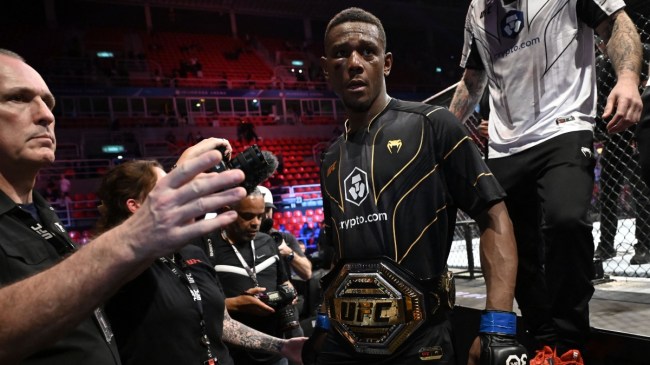 Jamahal Hill finally achieved his dream after defeating Glover Texiera for the light heavyweight title. Now, the new UFC champ sends a message to the division.

It sure sounds like Hill wants all the smoke now that he has the belt wrapped around his waist.

According to MMA Junkie, the UFC champ didn’t hold back in his fiery message. He sure sounds confident and seems ready for any challenge thrown his way. He might want to be careful what he asks for though, as there are plenty of worthy opponents ready to answer his call. Regardless, UFC fighters are a different breed, so Hill probably isn’t worried in the slightest.

New champ Jamahal Hill has a message for ALL light heavyweights. 🗣️

That’s quite the message from the new light heavyweight champion. Hill isn’t messing around and clearly has goals to keep the belt for as long as possible. We’ll see if he can do that or not, as the UFC has had multiple champs in this weight class since Jon Jones vacated the title.

For now, Jamahal Hill’s next opponent is unknown. He’s going to take some time to recover from his last fight. After that, the UFC will be setting up a fight down the road. Considering he won the belt in January, we should see Hill again at some point this year.

With that said, keep an eye on Jamahal Hill. Jiri Prochazka has been very vocal about wanting another title shot. But due to the fact, he’s still recovering from injury, the UFC could match up Jamahal Hill with someone else.