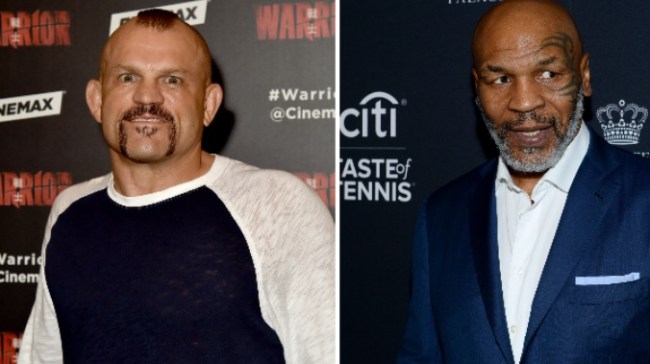 In a recent interview on Youtube, “The Iceman” was asked if he could beat Tyson if they were both involved in a fight.

Liddell caught some flack from people on Twitter but he doubled down on his claim on being able to beat Tyson in a street fight on Twitter.

People are so funny. I like Mike and no we’re not getting in a street fight. I’m a huge fan of mike and I never said I’d ko him I said I’d win. I’d take him down it would make no sense to stand with him he’s a beast and yes devastating one punch power with both hands. https://t.co/MnNOBfDzWo

I remember Tyson and I’m a huge fan of his but I’m not sure why biting Holyfield’s ear off makes him a better street fighter or better at stopping takedowns? https://t.co/aa9zUcKCiN

He won’t get three minutes I’d shoot right away. He had no ground training or takedown defense training at all. So he’d have to catch me on the way in or he’d never get off the ground period! https://t.co/juixbvqjJ8

Got some extra time on a movie set and just having some fun. Trust me I couldn’t care less what haters say! https://t.co/6fYsPXSoHg

While I agree with Liddell’s logic, having watched recent videos of Tyson showing off his boxing ability these days I wouldn’t put it past him to knock out Chuck in a street fight.