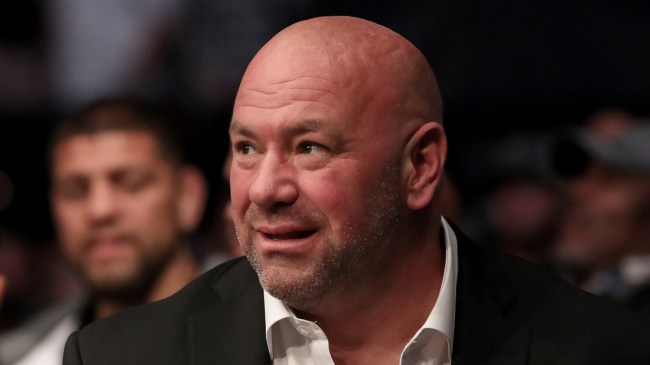 Dana White recently spoke up about his New Year’s Eve video that has the fight world on edge. The UFC President addressed the situation but some comments left many confused.

There was some good and some bad mixed in his comments on Wednesday. However, his statement about his punishment has fight fans questioning him.

According to MMA Junkie, Dana White ponders his own punishment for what transpired on New Year’s Eve. He stated, “Here’s my punishment: I’ve got to walk around for however long I live, and this is how I’m labeled now.”

Dana White shared his views on the reprecussions for slapping his wife back.

Last I checked that’s not really a punishment. That’s just something that comes with the action that took place. Ariel Helwani ponders why the UFC President was even asked this question.

Ariel Helwani reacts to Dana White at Media Day:
“He shouldn’t be the one answering the question on what the punishment should be”@arielhelwani pic.twitter.com/Dn6rzlwHmf

Overall, it sounds like fight fans are questioning White’s comments as a whole. Especially considering it sounds like Dana White is taking charge of punishing himself.

So no real punishment? ♥️ pic.twitter.com/isTn6t0AFu

This is a prime example of why Dana White’s comments are being questioned.

When I got a DUI, I got a $10k fine, I think a better punishment would’ve been to labeled as a drunk driver for the rest of my life.

What’s going to happen when a UFC fighter gets in trouble for something similar down the road?

Well this has to be the solution for every guy then. Everyone who beat up their girlfriend, doesn’t get any kind of punishment, since the the label as a “wife beater” will hang on to them for the rest of their life! Nice Dana😅😅😅

As of now, it doesn’t look like any real punishments are lined up for Dana White. Maybe if there is enough public outcry, then something will come to fruition. Until then, White will resume his role as UFC President.