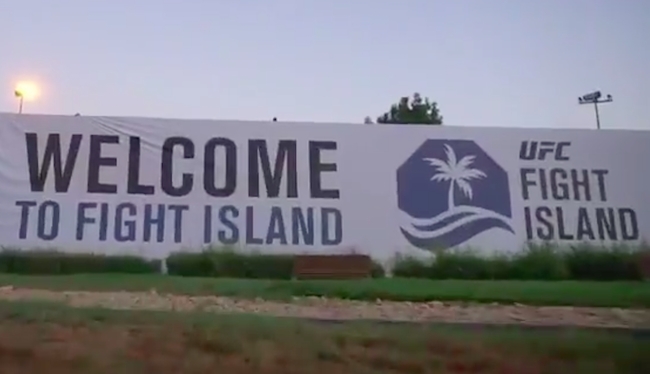 There have been a ton of visionaries over the course of human history who birthed innovations that allowed them to emphatically dunk on everyone who said it couldn’t be done, and now, we can add one more name to the list of people who managed to defy the odds in the form of Dana White.

If you haven’t been paying attention over the last few months, the UFC president has refused to be a sheep like all of the other sporting organizations who decided to suspend operations, as he wasn’t going to let a devastating global pandemic get in the way of his primary mission in life: raking in piles of cash with the help of people who beat the shit out of each other for a living.

However, venues were understandably hesitant to host events that violated basically every guideline issued by health officials, and after examining his options, he decided to do what any reasonable person in his position would: attain a private island where the only rules he has to follow are his own.

White wasn’t able to achieve his goal of introducing the world to what was dubbed “Fight Island” by the middle of June, as it turns out building a giant compound on an island in Abu Dhabi is a fairly sizeable undertaking. However, it appears he’s managed to do what Billy McFarland could not based on the brief video tour of the massive compound that he posted on Tuesday.

Requiring an absurd amount of metal used to erect absurd structures on an absurd amount of land, Fight Island was specifically designed to provide fighters with an experience specifically engineered to be the epitome of  “BADASS.” While White claims this is the hardest thing he has ever done, he is truly quite proud of it and has no reason not to be.

According to White, all of the fighters, referees, production people, and everyone else on the island will be tested before, during, and after the fights. I’m not quite sure exactly what testing “during” the fight means but White has been clear he wants to make sure competitors stay healthy so nothing gets in the way of them risking bodily injury in the Octagon.

There are some haters out there who think this is an entirely unnecessary stunt concocted by a rich dude trying to make even more money for himself but White insists he does this for the love of the sport. And I mean, c’mon, just look at this sunset.

If the fighters can chill out to a beautiful sunset like that, then Fight Island has my support. Sure, there’s a chance something could go horribly wrong before UFC 251 is held there on July 11th but I guess we’ll just have to wait and see.