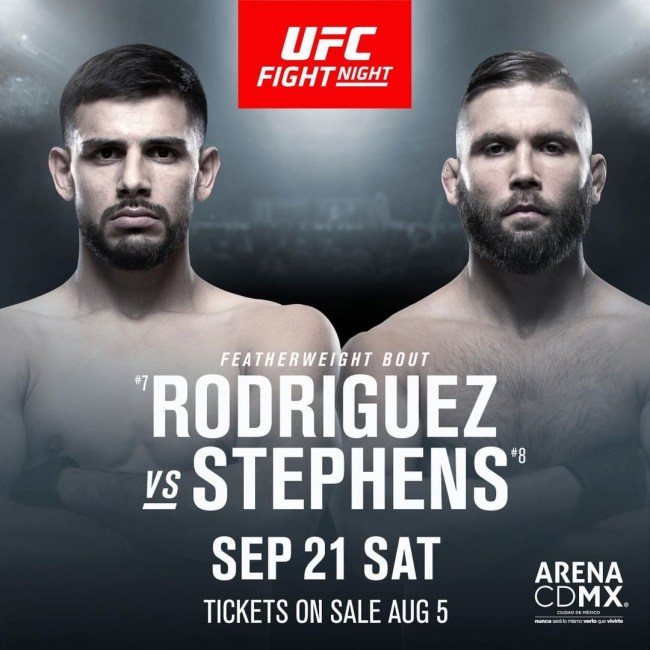 It’s that time of week again, guys, where UFC Fight Night features a solid matchup between two fighters that you won’t want to miss out on. And, for those wonder how to watch UFC Fight Night Mexico City — which pits Yair Rodriguez against Jeremy Stephens — make sure you get yourself an ESPN+ subscription, because the streaming service is the only place to take in the hard-hitting action.

UFC Fight Night Mexico City offers prelim fights at 5 p.m. EST, with the main event, Rodriguez and Stephens, happening at 8 p.m. EST. In that main fight, viewers will see Yair Rodriguez (11-2-0) take on Jeremy Stephens (28-16-0), with the former fighting on his home turf, which could impact the overall fight as the crowd, presumably, gets behind their native son. And, if you can’t be there in real life, ESPN+ is the only other place to take it in.

Remember, ESPN+ is just $4.99 a month or $49.99 for an annual subscription, meaning you can get all the UFC (and other sports content you love) without committing too much. With a ton of original series, live events, analysis and serving as the exclusive home for the UFC, you’ll have everything at your fingertips.

If you’re planning on watching UFC Fight Night Mexico City with Yair Rodriguez and Jeremy Stephens, don’t forget about all the other exclusive UFC programming that ESPN+ has for you to watch. Here’s some of what you can expect with your subscription to the streaming service.

Now that you know some of the badass details, it’s time to get yourself as much UFC action as humanly possible, and see for yourself why ESPN+ is worth your time for all things sports. Nobody wants to be that guy who misses out, so sign-up for ESPN+ and get the best UFC (and sports) content anytime you want.