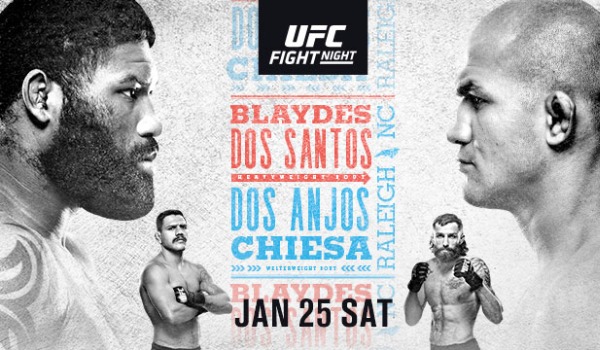 This week, UFC Fight Night is bringing all fights live and exclusively on ESPN+. In UFC’s first visit to Raleigh, the PNC Arena sets the stage for a matchup between two top-five heavyweights, Curtis Blaydes and Junior Dos Santos.

Who will emerge victorious and take another step closer to current champion Stipe Miocic? Tonight, you can find out by tuning into the UFC Fight Night stream from Raleigh, only on ESPN+.

UFC Fight Night start time is 5:30PM ET for the prelims. Start time for the main card event between Blaydes and Dos Santos is 8PM ET.

Here’s how to stream UFC Fight Night Raleigh via ESPN+

It’s very easy to sign up and watch tonight’s UFC Fight Night on ESPN+. Coming to you as a monthly package for just $4.99 and an annual subscription costing just $49.99, it is a great deal for all the sports lovers out there.

If you’re wondering what ESPN+ exactly is, here’s a quick summary. ESPN+ is a new streaming service for live sports like UFC fights, college football, Top Rank boxing, and Serie A soccer, along with so much more. ESPN+ also provides exclusive content like the acclaimed ESPN 30 for 30 online, Lebron James’ More Than An Athlete, ESPN FC, and ESPN Plus fantasy football tools.

How to watch UFC Fight Night

Now that you have ESPN Plus, it’s Fight Night! Here’s how to watch the stream on a number of devices, including the following:

The main card event will feature No. 3-ranked contender Curtis Blaydes (12-2, 1 NC) against No. 4-ranked Junior Dos Santos (21-6). Blaydes, winner of six out of his past seven fights, returns to the Octagon looking to move closer to his first career title shot. He already holds the record for most takedowns in UFC heavyweight history (40). A former UFC heavyweight champion, Dos Santos holds the record for most knockdowns in the division and is gunning for his 16th UFC Octagon victory. He has already got wins over former 2006 PRIDE World Open-Weight Grand Prix Champion, Mirko Cro Crop and former UFC champions Shane Carwin, Fabricio Werdum, Cain Velasquez and Frank Mir, as well as current champion Stipe Miocic.

In addition to the main card, the co-main event features a dangerous welterweight matchup between Rafael Dos Anjos (29-12) and Michael Chiesa (16-4). Dos Anjos, a former lightweight champion, is chasing his fifth victory at a weight of 170. Chiesa won season 15 of The Ultimate Fighter and is returning to the Octagon following back-to-back victories.