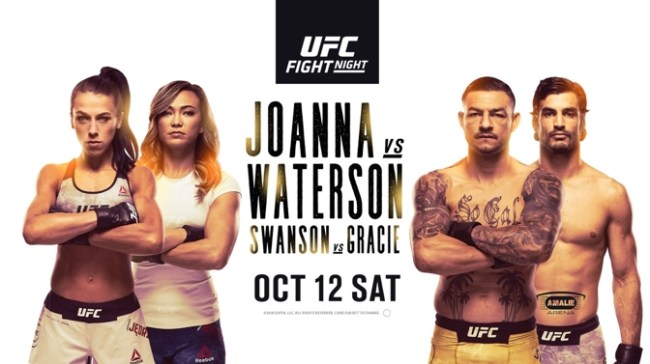 Whether you’re a diehard sports fan, a mega UFC nut or just like watching hard-hitting action, UFC Fight Night is the ideal place to get your itch. And for those wondering how to stream UFC Fight Night Tampa this weekend — which has an intriguing co-main card showdown featuring contenders Joanna Jedrzejczyk and Michelle Waterson in a strawweight bout, along with a featherweight matchup between Kron Gracie and Cub Swanson — then an ESPN+ subscription is for you.

As the exclusive home of UFC, ESPN+ is the only other place to take in UFC Fight Night Tampa, meaning you won’t be missing out on any of the drama and intrigue that the Octagon brings.

The co-main events going down at UFC Fight Night Tampa are two highly-anticipated fights. With Joanna Jedrzejczyk (15-3-0) being a former strawweight champion and current No. 5-ranked contender, she’ll have her hands full with No. 7-ranked contender Michelle Waterson (17-6-0), who has won three-straight fights.

In the other main event, Kron Gracie (5-0-0) and fellow featherweight Cub Swanson (25-11-0) go toe-to-toe in a battle of newcomer versus seasoned vet. Who will prevail? The answer comes tomorrow night, with prelims coverage beginning at 5 p.m. ET only on ESPN+, and the Main Event beginning at 8 p.m. ET.

Remember, ESPN+ is just $4.99 a month or $49.99 for an annual subscription, meaning you can get all the UFC (and other sports content you love) without committing too much. With a ton of original series, live events, analysis and serving as the exclusive home for the UFC, you’ll have everything at your fingertips.

If you’re planning on watching UFC Fight Night Tampa, don’t forget about all the other exclusive UFC programming that ESPN+ has for you to watch. Here’s some of what you can expect with your subscription to the streaming service.

Now that you know some of the badass details, it’s time to get yourself as much UFC action as humanly possible, and see for yourself why ESPN+ is worth your time for all things sports. Nobody wants to be that guy who misses out, so sign-up for ESPN+ and get the best UFC (and sports) content anytime you want.