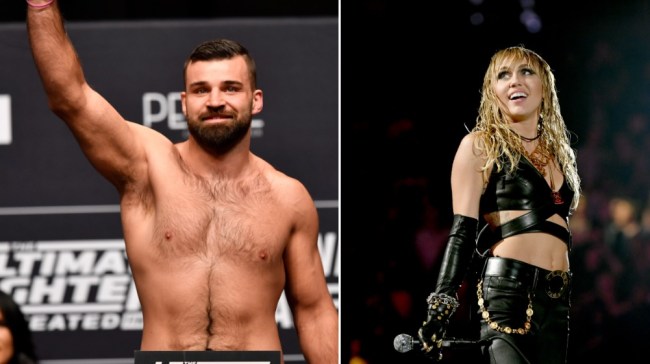 UFC fighter Julian Marquez is living proof that you should always shoot your shot.

Last week, Marquez submitted Maki Pitolo in the third round of their fight at UFC 258 and immediately decided to ask Miley Cyrus to be his Valentine during his postfight interview. Cyrus responded on Twitter to Marquez’s shoutout by telling him to “Shave an MC into your chest hair and I am YOURS,”

Shave an MC into your chest hair and I am YOURS ❤️ Happy VDay and Congrats my love!

Marquez appeared to drop the ball when he responded to Cyrus by demanding that she get a “Cuban Missile Crisis” tattoo.

@MileyCyrus If you get a henna tattoo that says Cuban Missle Crisis above your belly button like 2pac I’m in #ThugLife 😏 https://t.co/cGA4gBOVJI pic.twitter.com/I6TqI0fNz9

Marquez spoke to BJPenn.com and says despite his awkward response, Miley went on to hit him up in the DMs.

“Yeah dude, she shot me a DM. We spoke and she’s cool, man. Like legitimately, this is all like, there’s nothing crazy. Everyone’s like, ‘You missed your shot.’ Actually no, I didn’t miss my shot. I have the same exact shot as I did prior. The only difference is that she knows who I am, she follows me. Like, Miley’s a friend now. Who would have thought I would have a friend (like her). Yes, I love her. She’s amazing. Like she’s one of the greatest singers in my point of view. But like I’m not trying to date Miley. Miley’s got a bunch of stuff going on. That’s a dope friend and I’m going to keep that dope friend,