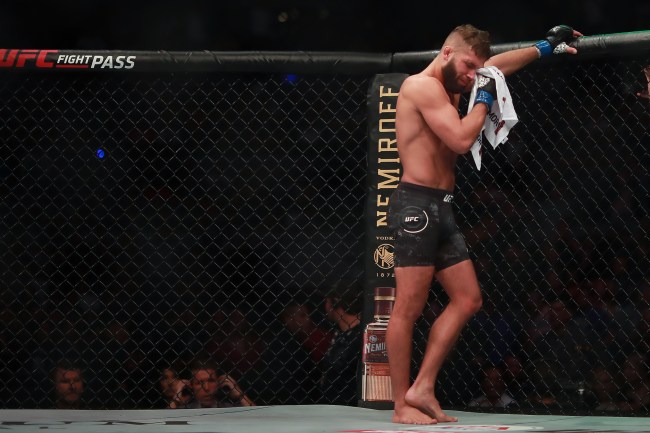 “He got me good.” To the disdain of a Mexican crowd now throwing garbage into the Octagon, Jeremy Stephens and Yair “El Pantera” Rodriguez is ruled a No Contest due to stoppage (eye poke) #UFCMexico pic.twitter.com/c6lNEN3auF

This strike to the eye caused the #UFCMexico main event to be ruled a No Contest pic.twitter.com/EXIKa2PyeE

In other news, Jeremy Stephens and Yair Rodriguez Fight is stopped at 15 seconds in due to an eye poke, rules a no contest. #UFCMexicoCity pic.twitter.com/FX4fz9wEGi

Fans in attendance were angry at the anti-climatic and blamed Stephens for not continuing the fight. Stephens had to be escorted out by security after fans began throwing beer at him.

Can’t recall ever seeing behavior like this from fans at a UFC event. Maybe I’m forgetting one, but not even in the early days. Gross. pic.twitter.com/12QqIl8hod

Even Yair Rodriguez seemed angry with the stoppage and snapped at UFC announcer Michael Bisping in the cage.

Just not a good look at all for the fans. Terrible.

Update: Jeremy Stephens had a message for fans after the fight.

If you think @LiLHeathenMMA faked an eye injury to get out of his #UFCMexico fight with Yair Rodriguez, well here you go.