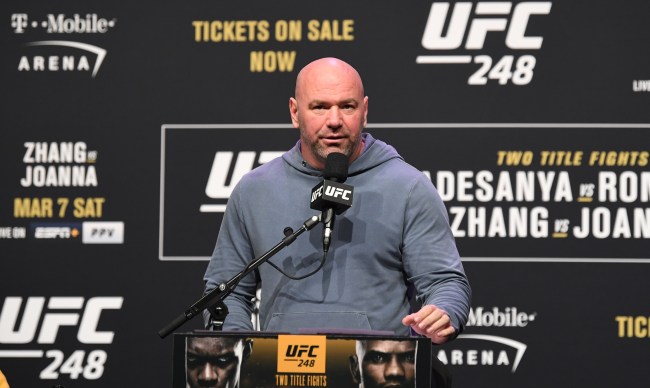 Dana White is not a fan of the event Logan Paul and Floyd Mayweather put together this weekend but he understands that celebrity boxing is here to stay because there are plenty of suckers who are willing to pay to watch them.

On Monday, White was asked his opinion on the fight and he said that he knows that there’s a market for celebrity fights but he’s not interested in the UFC participating in them.

Dana White reacts to last night's boxing match between Floyd Mayweather and Logan Paul and if it made him want to jump into boxing to fix the model.

“Think about this — imagine if Kim Kardashian wanted to fight Amanda Nunes. How big do you think that fight would be? It would be huge. It would be the biggest [event] but give me a f*cking break.”

White went on to expand on his issue with celebrity boxing fights by saying that at the end of the day the fans feel ripped off when the events don’t live up to the ridiculous hype because the fights end up being terrible.

It’s exactly what boxing has always been,” “You create this energy around a fight where you’re like ‘oh this [is exciting]’ and then you watch it and then you turn the TV off and go ‘I just wasted another evening, I should have gone out and did something else.’ I don’t ever want people feeling like that when they turn the TV off watching some of our fights.“

White went on to blast the “dummies” who continually spend $50 to watch fights only to end up disappointed.

“I’m not trying to sh*t on these other guys,”. “Listen, if you’ve got people that are stupid enough to spend that kind of money, you deserve to take those dummies’ money. They deserve it.

“The guys who went out and fought and got you to pay $50, they deserve your money. You’re stupid.”

It’s pretty funny that even Mayweather doesn’t deny that he basically committed a bank robbery by getting people to buy his fight against Paul.