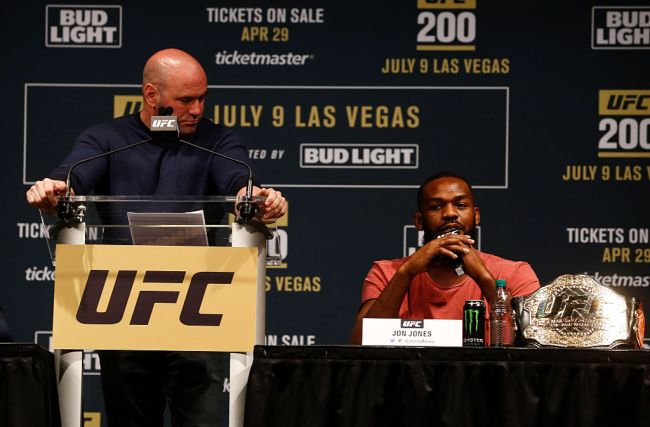 Dana White is not surprised about Jon Jones’ latest arrest.

On Friday afternoon it was reported that Jones was arrested for domestic violence just a day after attending the UFC Hall of Fame ceremony in Las Vegas.

Dana White on Jones's arrest: "Is it really shocking any more? It's really not. It's become not shocking, it's almost like 'uh oh, he's in Vegas again, what's gonna happen today?'… He proves every time he comes to (Vegas) that he can't handle this place."

“It’s hard to bring this guy to Las Vegas for any reason,” “This city is not good for Jon Jones. And here we are again.”

“It’s like it’s not even shocking anymore,” “When we bring him here, it’s almost expected. Can’t even get him into Las Vegas for less than 12 hours to induct him into the Hall of Fame. It’s a problem. This guy’s got a lot of demons, man – a lot of demons.”

“Is it really shocking anymore? It’s really not. It’s become not shocking. It’s almost become, ‘Uh oh, he’s in Vegas again. What’s going to happen today?’ You want to hope the guy is better, and that won’t be the case, but he proves every time he comes to this town that he can’t handle this place.”

Jones has a long history of legal issues, which includes a 2012 DWI charge, a 2015 hit-and-run that injured a pregnant woman, a 2019 battery charge, and was most recently Jones was arrested for shooting a firearm while intoxicated in 2020.