UFC’s Colby Covington Says He Beat Tyron Woodley Because He Stands For ‘Black Lives Matter’, Gets Called A ‘Racist Scumbag’ By Leon Edwards 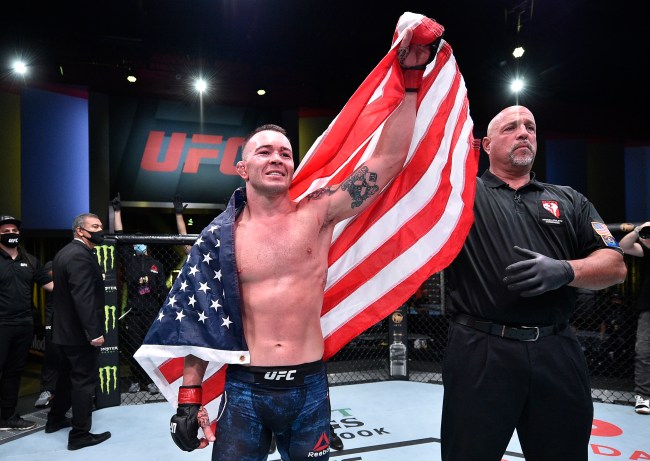 UFC welterweight Leon Edwards is not fan of Colby Covington or his politics.

On Saturday night, Covington dominated Tyron Woodley for four rounds until the fight was stopped when Woodley appeared to injure his ribs.

"I want my belt back! Where's my f—kin' belt? Where you at, Usman? Where you at, Street Judas?"@ColbyCovMMA wants the smoke 💨 #UFCVegas11 pic.twitter.com/k7dOSJLOhv

After the fight, Covington blasted Woodley for representing everything he hates which includes standing for the “Black Lives Matter” movement and being a “communist” who “hates America”.

.@ColbyCovMMA says there's no peace with Tyron Woodley after their fight: "He stands for everything I hate. He stands for evil. He stands for Black Lives Matter."#UFCVegas11 | Full interview: https://t.co/skjuVe9BtJ pic.twitter.com/brWk5bMLrD

Following his tirade at UFC Vegas 11, a couple of prominent black fighters including Edwards and Kamaru Usman stepped up to say that they were waiting to knock out Covington for his “racist” comments.

Dont worry I'll take out the racist scumbag, December. Let's see if @ColbyCovMMA joins the "I won't fight Leon club" and goes running like the rest of them.@ufc @UFCEurope

Usman, who is currently the UFC welterweight champion after beating Covington last December, has been critical of Covington’s political commentary in the past.

I really wish someone would just break your jaw already… ✅ https://t.co/ULJbCFQQUT