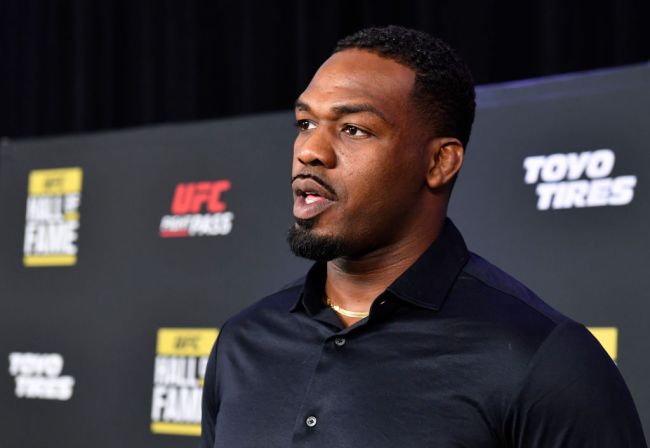 UFC’s Jon Jones had a bizarre reaction to the latest reports about his domestic violence arrest.

On Tuesday, the Las Vegas police department released their report on Jon Jones’ arrest from last week. According to police, Jones was arrested after they found his fiancee bloodied up in a Las Vegas hotel room. Following his arrest, Jones reportedly angrily slammed his into the police car causing damage.

Jon Jones allegedly pulled a woman’s hair and headbutted a police car, causing damage to the vehicle, according to the arrest report from the Las Vegas Metro PD. More coming to @espn.

Hours after several media outlets reported on the arrest, Jones released a bizarre workout video on Instagram vowing that he was going to stop drinking alcohol and promising to devote himself to using the incident to become a better person while Randy Newman’s “You got a friend in me” from Toy Story plays in the background.

Jon Jones posted an Instagram story of him doing a bench press this evening. On the story were several phrases, including: “I have way too much trauma to consume alcohol, my brain simply can’t handle it anymore. I will leave alcohol in my past forever.” pic.twitter.com/lnvxWjls3U

“I have way too much trauma to consume alcohol,” Jones wrote. “My brain simply can’t handle it anymore. I will leave alcohol in my past forever.

“Now is the time to work harder than ever.

“Turn this nightmare into the best thing to ever happen in my life.

“What the devil means for bad, God means for good.

“Get right back on my horse.”

“Get right back on my horse” tells you everything you need to know about him.

He doesn’t think there’s going to be long term consequences to this because he’s never had to face the consequences of his actions. Some jail time would be good for him, no joke. https://t.co/mKXupE6T7U

“I’m going to be better”

We’ve heard this before. https://t.co/vEuj8VbZVo