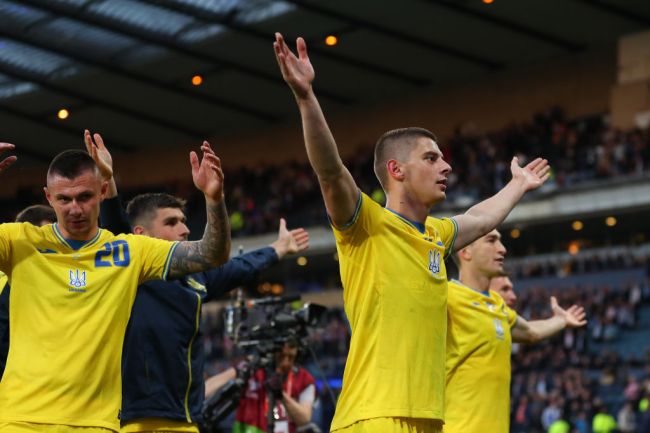 After months of nothing but misery, the people of Ukraine have finally been given something to celebrate. After suffering through months of attacks from Russia, their national soccer team returned to competition and won their first competitive match since the start of the Russian invasion to advance to the final round of the UEFA World Cup Qualifying Playoff.

The match got off to a bit of a rough start for Ukraine, with two of their players picking up yellow cards in the first 11 minutes of the match, but they would quickly take control after that.

Ukraine created quite a few chances early, but couldn’t put the ball in the back of the net until their captain, Andrii Yarmolenko scored on a breakaway in the 33rd minute. The match would head to halftime with Ukraine ahead 1-0.

It didn’t take long for them to extend that lead once they returned from the break. In the 49th minute, Roman Yaremchuk headed home a cross to give Ukraine a 2-0 lead. They remained in the driver seat for the next 30 minutes until Scotland made things interesting late.

In the 79th minute, Callum McGregor put a shot just over the head of the Ukrainian keeper that just snuck over the goal line before a defender could clear it and cut the lead in half.

Scotland fought to pull themselves back level, but were unable to create a real scoring opportunity and eventually, Ukraine took advantage of their aggressiveness and scored one more to put the match away.

The goal came from Artem Dovbyk on a breakaway as time was expiring in the match. Here is the call of the goal on Ukrainian television.

As called on Ukrainian TV: pic.twitter.com/Q35o1CUgB4

The goal sealed a 3-1 victory for Ukraine and sent them through to the finally round of the UEFA Playoff.

Ukraine defeats Scotland and will face Wales for a spot in the 2022 FIFA World Cup 🇺🇦⚔️🏴󠁧󠁢󠁷󠁬󠁳󠁿 pic.twitter.com/NE9SmvmT87

Ukraine will now take on Wales on Sunday morning with the winner claiming a spot in the World Cup.