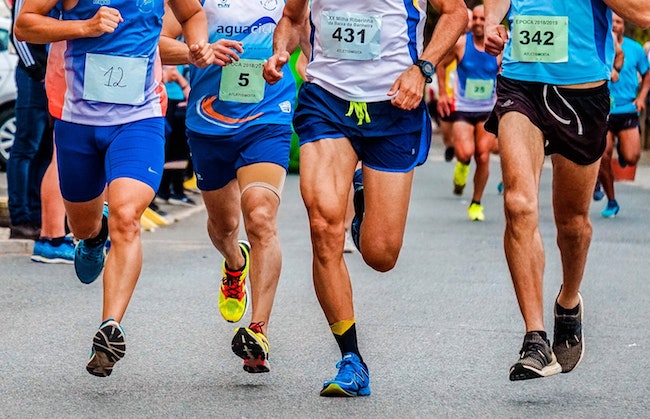 Photo by RUN 4 FFWPU from Pexels

I’m fascinated by the diet of highly trained athletes. I could care less about my own diet, as evidences by the two bagels I ate this morning, but the food that goes into the mouths of athletes is interesting.

First, there was The Rock and then world champion sumo wrestler but today I’m mesmerized by the diet of ultramarathon runner Dean Karnazes. Obviously, Karnazes needs fuel for his body but he’s busting all the old myths of runner’s diets with his different approach to eating for optimal performance.

There’s a lot of lore and common wisdom about the ideal runner’s diet: Everyone knows that the night before a big run—whether you’ve signed up for a 5k or a full-on marathon—you’re supposed to carbo-load on stuff like diavolo pasta, brown rice, or buckwheat pancakes. Well… supposed to. “That’s so passé,” says Dean Karnazes.

Karnazes, 52, is an ultramarathoner who ran 350 miles—or a little less than the distance between Los Angeles and San Francisco—in 80 hours and 44 minutes; completed 50 regular, 26-mile marathons in 50 days; and wrote Ultramarathon Man: Confessions of an All-Night Runner. In the last 20 years of professionally being someone who runs very, very far, Karnazes has transitioned to a mostly raw diet that upends a lot of conventional wisdom about what runners need to eat to perform.

Before diving into exactly what Karnazes eats, let’s review what he used to eat — insane amounts of junk food, sometimes right in the middle of a race.

“I used to live on junk food, thinking that since you burn 30- to 40,000 calories on some of these runs, you need to get as many calories as you can no matter how you get them in.” One time, on the solo leg of a 200-mile relay run, in the middle of the night with a cell phone and a credit card, Karnazes ordered a pizza delivered to him and kept running while he ate the whole thing in a big roll.

Now THAT’S a power move. How psyched out would you be as a competitor if a dude strolled past you in a run eating an entire fucking pizza? I’ll tell you, VERY PSYCHED OUT.

Here’s Karnazes diet in a nutshell. Literally, in a nutshell, because he eats so many of them along with fruit, fish and yogurt.

That intuitive elimination process led him to a diet that’s pretty close to the Paleo Diet, based on the idea that humans aren’t meant to eat anything they can’t pick from a tree, pull from the ground, or kill themselves. Karnazes’s diet isn’t as bacon-heavy as most Paleo-enthusiasts. Instead it’s heavy on fruits (VERY heavy on fruits), vegetables, cold-water fish, and yogurt. If he has any meat, it’s organic, free-range bison, usually so lightly cooked that it’s practically tartare.

The absence of oatmeal and pre-run waffles may cause skepticism, but the fact that Karnazes’s diet is enough fuel to just get him through his workouts, let alone his monster runs, is a pretty strong argument for its effectiveness. When gearing up for a big run he eats 8,000 to 10,000 calories a day. He starts with a base of 3,200 calories, and then adds 300-500 calories per hour of running.

His only real meals are yogurt at breakfast, sometimes flavored with oregano, often with fruit and nuts, and a very large dinner of salad, vegetables, and fish or bison. Most of his carbohydrates come from fruit, which Karnazes eats throughout the day whenever he’s hungry (“I think the notion of three meals a day is rubbish”). And—surprise!—he’s hungry often.

For a detailed menu of Karnazes’s typical day, check it out on GQ.