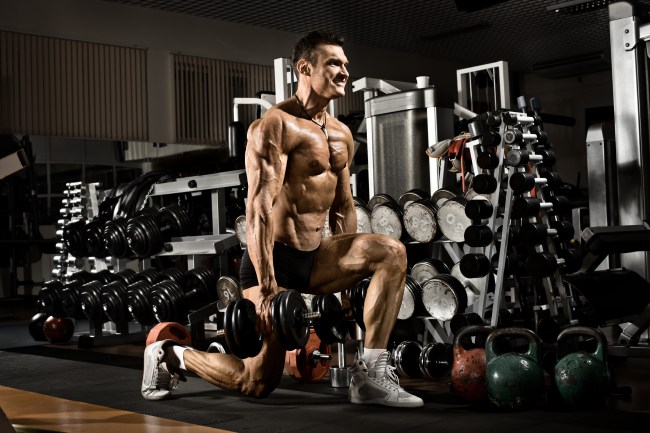 I love the big 3 just as much as anyone else. To me, there’s nothing better than getting in the gym and moving as much weight as possible on the squat, bench, and deadlift. They’re kickass exercises that deliver a ton of bang for your buck.

But every now and then you’ve got to make a change in order to keep progressing. Especially if you’ve been doing a lot of lifts the old fashioned way. One of my favorite ways to do this is by through unilateral training.

What is unilateral training?

Unilateral training is nothing more than using one arm or one leg at a time, versus using two. Typical exercises like the squat and bench press are considered bilateral, since they utilize both arms and legs at the same time.

Taking some time to focus on unilateral work versus bilateral work has a really high pay off, and it’s something every serious lifter should spend time doing.

The benefits of unilateral training.

The magic behind unilateral training lies in helping correct potential imbalances that might be in place after years of bilateral work. When you spend all of your training time doing bilateral work, you’ll usually develop some type of muscular imbalance that you might not even be aware of.

You can usually compensate for these imbalances thanks to the weight being distributed throughout a barbell, or being able to balance yourself against a dumbbell in each hand.

All of the sudden when you don’t have that counter balance and start moving weight unilaterally; these imbalances come to the forefront. You’ll probably notice you have one side that is much stronger than another. You’ll also definitely notice that your core has to work a hell of a lot harder to keep you balanced.

Because of that extra core activation, unilateral work is kickass way to ensure you’re getting even more ab work from traditional lifts. Even something like the dumbbell bench press lights your abs and obliques on fire.

After a few weeks of unilateral work, you’ll wind up with a much stronger core. You’ll also have corrected any imbalances that you may have. Which means once you move back to traditional bilateral lifts, you’ll usually wind up a hell of a lot stronger.

Here are 3 unilateral lifts worth trying.

This is my favorite unilateral pressing movement. You can do it on an incline or flat bench, it doesn’t matter, the video shows me on a flat bench.

Like I mentioned earlier, these lifts light your core on fire. This is because they train an anti rotational component that we normally neglect. Because you don’t have a weight in the opposite hand, your abs and obliques have to stay activated just to keep you from falling with the weights.

I’ve started falling in love with this movement as of late. I do it in a half kneeling position, because I’m able to get a bigger stretch on my lats thanks to the increased range of motion.

Just like the dumbbell bench press, your core lights up to keep you from rotating, making this an excellent all around exercise.

I also love it because it helps me “feel” my lats contract, further ingraining the mind muscle connection, which can lead to more growth.

Single leg movements under heavy loads don’t get near enough love, in my opinion. We all love the idea of having a huge squat, and the quickest way to get there is to squat more.

But if you’ve hit a plateau, sometimes taking a few weeks to focus on Bulgarians can be a good ol fashioned plateau buster. Bulgarians work your glutes like crazy, and give you a great stretch throughout the quads as well.

If your knees cave in on the squat this can also be an excellent move to help remedy that. Your developing more stability and single leg strength, which translates well to the back squat.

One quick key on Bulgarians: Think about sinking your hips back and down. You don’t want to just drop straight to the ground with these, as that can place an unnecessary amount of stress on the knee joint, compared to spreading it throughout the hip and knee joints.

Give these unilateral moves a try if you’re looking for more strength, better abs, and a change of pace to your routine.