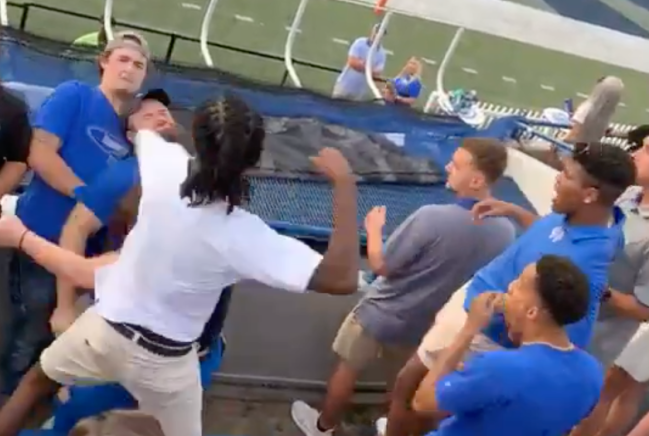 Oh, the University of Memphis… How perfectly on-brand you continue to be…

While details as to exactly what happened aren’t certain, it’s very clear that the man in the white t-shirt took offense to something that the Tiger fans in the front row said or did.

A Twitter user named ‘Slim out of Memphis’ appeared to take credit for the savage flying fists. He certainly “made him,” as requested.

Once he gets pushed, it’s game on.

Let’s break down the tape:

Slim starts throwing haymakers and connecting. He lands at least a half-dozen MASSIVE bombs and you can hear each and every one of them hit.

His biggest swing, a knockout, comes at the six-second mark.

The guy who wore the vicious punch while just trying to protect a girl near the action was probably not Slim’s intended target. Either way, he got clocked and went down. Hard.

Look at the reaction of the guy on the right. He can’t believe it.

Meanwhile, Slim keeps chucking knucks and dodging punches like Mayweather in the ring. And then the guy in the grey goes down on a hilariously bad, half-conscious miss.

As the downed bodies start to figure out where they are, Slim finishes things off with a dominant takedown.

The fight eventually gets broken up and there is clear bloodshed from the brawl. Slim even has a stain on his white t-shirt.

The highlight of the entire video comes as things begin to call down. From somewhere in the back, an innocent bystander begins to shout “CAN’T WE ALL JUST GET ALONG!”

It’s incredible commentary and the cherry on top.

The whole sequence couldn’t be more Memphis. Not only does it take place at the grimey, hot, concrete hellpit that is the Liberty Bowl, but it went down exactly how you’d expect.

A Memphis fan, wearing a backwards hat and jeans in 85+ degree weather, was stepping on the toes of Slim— so he says. Slim asked him to stop, and the guy (who probably went to Christian Brothers) thought that he was “holier than thou” and challenged Slim.

Slim made him eat his words.

And then, because Memphis fans talk a big game but have never actually been in a fight, those around Slim tried to stop the royal rumble and threw some pretty abysmal punches. The vast majority of them missed and the one guy missed so badly that he fell to the ground.