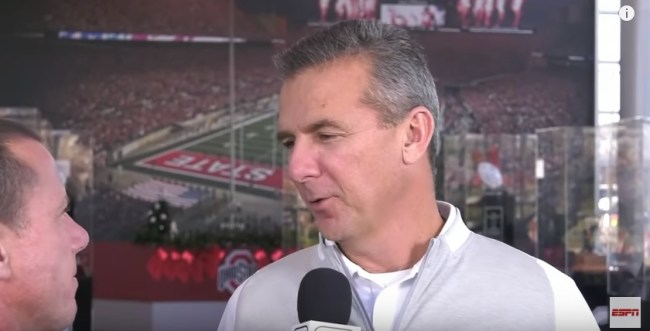 Text messages I have obtained, an exclusive interview with the victim and other information I have learned shows Ohio State coach Urban Meyer knew in 2015 of domestic abuse allegations against a member of his coaching staff.

Meyer said last week during Big Ten Media Days that he had no knowledge of two alleged domestic violence incidents in 2015 with former assistant wide receivers coach Zach Smith that were investigated by the Powell (Ohio) Police Department.

Today. the Ohio State board of trustees is meeting to decide Meyer’s fate now that the investigation in the matter has been concluded.

OSU Board of Trustees now in executive session to discuss the Urban Meyer investigation. We could get a final decision today. pic.twitter.com/VZC8cf1Xed

According to 247 Sports report Dave Biddle, school president Michael Drake is pushing for a suspension but Meyer looks like he’s going to fight it because he doesn’t believe he did anything wrong.

CliffsNotes version (from what I've been told): Ohio State's BoT wants to reinstate Urban Meyer immediately. University president Michael Drake is balking at that; wants Meyer to serve a suspension. Meyer refuses to serve suspension since he thinks he did nothing wrong. #Buckeyes

In the end the board of trustees will make the final decision and not Drake.

It's not really Drake's decision. That was just falsely reported for the last 3 weeks. He works for the board. It's really their decision. So, if it comes down to Drake v the BoT, the board will win. https://t.co/20CM95wfvA

Update: Urban Meyer has been suspended the first three games of the season.