This Lightning Strike At The U.S. Women’s Open Looks Like Something Straight From A Movie 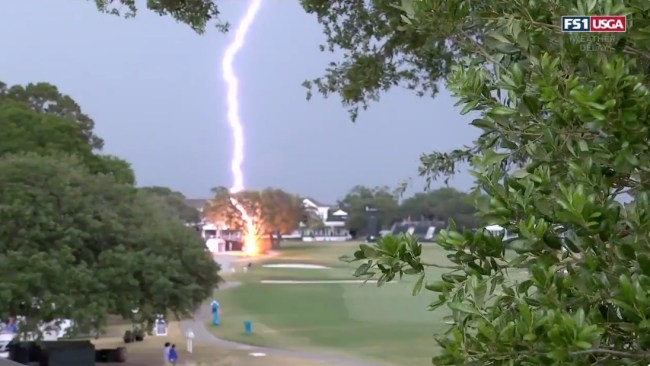 *Insert your ‘the U.S. Women’s Open has been absolutely ELECTRIC this week’ jokes here.*

Officials blew the horn just after 5:00 p.m. on Friday at the Country Club of Charleston to clear the players from the course and it’s a good thing they did. Shortly after the horn blew a lightning bolt struck a tree by the 18th green and it looks like something straight from a movie.

Lightning strikes a tree at the US Women's Open during a weather delay (h/t @shanebacon) pic.twitter.com/eHJ3Wsidbk

The slow-mo part of the video is insane. At first it doesn’t look like there’s anyone near the tree, but a few seconds in you can make out a person running into the building just left of the tree. I’m going to go ahead and say they had to make an emergency stop at the gift shop for a new change of pants after witnessing that. It has been reported that nobody was injured, thank goodness.

The oak tree looked to have taken the damage pretty well as you can see in the photo below, but it was later removed from the property. That’s a tough tree to lose for the shape of the hole both visually and strategically as it guarded the left side of the green of the closing hole.

The old oak tree that was struck by lightning at Country Club of Charleston was removed last night for safety reasons. pic.twitter.com/HY9ZLlSMlt

The second-round of the major championship got back underway about an hour and a half later. Japan’s Mamiko Higa (six-under) leads by one shot over the likes of American Jessica Korda and France’s Celine Boutier as the third-round gets underway on Saturday.

Lightning strikes are some of the coolest things the eye can see, but let’s let this be a little reminder that swinging metal sticks around with weather in the area is never a great idea.