The Fight Is Back On! USADA Clears Nate Diaz To Fight Jorge Masvidal At UFC 244 After Drug Test Confusion 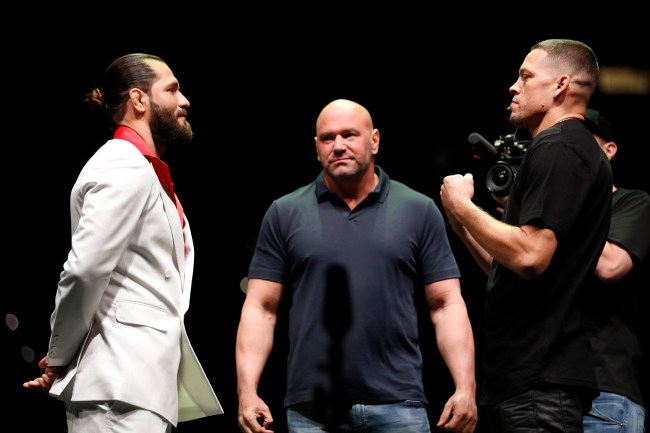 The UFC 244 fight between Nate Diaz and Jorge Masvidal for the BMF title is back on.

Just yesterday, Diaz announced the fight was off after he tested positive for a “tainted supplement”.

I’m not gonna make it out to NYC for fight week next week because they say I might have tested with elevated levels that they say might be from some tainted supplements. I call false on that because I only take Whole Foods or natural food supplements. I don’t even eat meat. So until UFC, USADA or whoever is FUCKING with me fixes it, I won’t be competing.

“I’m not gonna play their game and try and hide it or keep it quiet, as they suggested. I’m not going to have my name tainted as a cheater like these other motherfuckers who keep quiet until after the fight just so they can get paid. Fucking cheaters.

“I don’t give a fuck about some money over my dignity and my legacy. I’m not playing along with this bullshit. I’m not staying quiet and figuring it out after the fight. That’s cheating. So fight game I’ll see you when I see you.

“Sincerely, the realest baddest motherfucker in the game.”

Today USADA cleared Diaz to fight after they figured out the positive test was due to a contaminated organic, vegan, plant-based daily multivitamin.

Breaking: Nate Diaz is eligible to compete at UFC 244. USADA has ruled he has not committed an anti-doping violation. Elevated level of SARMS was traced to a contaminated organic, vegan, plant-based daily multivitamin.

Brief statement from USADA on Diaz: "Following Mr. Diaz’s public comments on Thursday we can confirm that he has not been sanctioned or provisionally suspended by USADA."

UFC Chief Legal Officer Hunter Campbell says he has "every reason to believe" Diaz will still fight in New York.

UFC has announced @NateDiaz209 has been cleared of any wrongdoing in his USADA case and is eligible to compete vs. Jorge Masvidal at #UFC244.