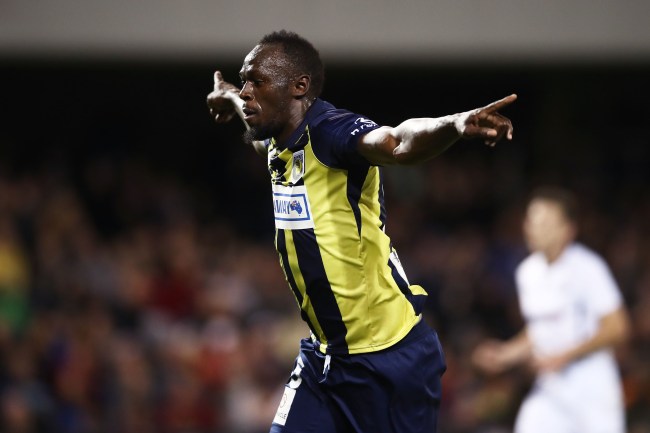 Usain Bolt, the world’s fastest man, is retired from sprinting but still holds world records in the 100-meter, 200-meter, and 4×100-meter relay. The Jamaican sprinter is *only* 32-years-old which in the world of professional sports is actually pretty damn old. But that hasn’t stopped him for turning the page on a new career.

Back in a 2016 interview with the Guardian, Usain Bolt made his intentions public. His goal was to become a professional soccer player after retiring from sprinting. Ultimately, his dream was to play for Manchester United in the Premier League which, to be fair, the dream of like 75% of all young boys across the planet (not really here in the USA but across the globe, yes).

Despite being nicknamed ‘Lightning Bolt’ as the world’s fastest man, he expressed that his dreams were on the soccer pitch. “For me, if I could get to play for Manchester United, that would be like a dream come true. Yes, that would be epic.”

Manchester United might be in disarray at the moment, but Bolt’s chances of playing at Old Trafford are still slim to none. He kicked off his professional soccer career by playing with Norwegian side Strømsgodset against Norway’s Under-19 team in a friendly but it hasn’t stopped there.

I’m not sure if the game was last night or today because it took place on October 12th, which is today, but Australia‘s like a day ahead of us and Usain Bolt scored all fo those goals while we were all sleeping.

And here’s his second goal, both taking place in the second half of the game.

Usain Bolt left the game in the 74th minute after scoring two goals and kicking off his professional soccer career better than anyone could’ve ever imagined. He later told The Sydney Morning Herald “It was a big deal. Scoring a goal in your first proper match … it’s a good feeling. I’ve been improving quickly, I personally feel.”

Despite owning Macarthur South West United with two goals (the CCMariners won 4-0), it’s still A LONG ASS PATH for Usain Bolt to move from Australia’s A-league to England’s Premier League, the most prestigious league on the planet. Especially since Usain Bolt’s age is constantly working against him.