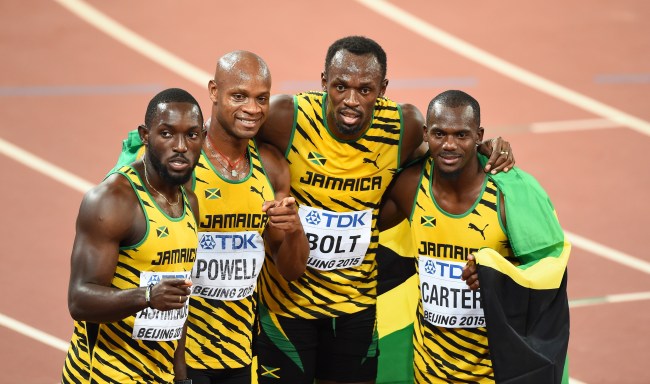 The world’s fasted man will have to return one of his nine Olympic gold medals after his Jamaican teammate Nesta Carter tested positive for doping.

Carter was part of the Jamaican squad that won the 4x100m in Beijing in 2008 and was one of 454 selected doping samples retested by the International Olympic Committee (IOC) last year, according to BBC. The banned stimulant detected was methylhexaneamine, an energy boosting supplement that has been the cause of five reported deaths since its inception.

Carter ran the first leg for Jamaica’s 4x100m relay team in Beijing, when the team posted a world record of 37.10 seconds, besting Trinidad and Tobago and Japan, who will now have their medals upgraded. Brazil will now receive bronze.

For perspective, of the 4,500 tests that were carried out at the 2008 Beijing games, just nine athletes were caught cheating.

Bolt’s legacy won’t be directed tarnished, as he wasn’t the perpetrator, but it will void his ‘triple triple’ achievement that he achieved last summer in Rio. The 30-year-old won gold in the 100m, 200m and 4x100m relay in Rio to match what he did in the same events in 2008 and 2012. Now, he only can say he has a ‘triple, triple, double.’

What a fucking slow poke.