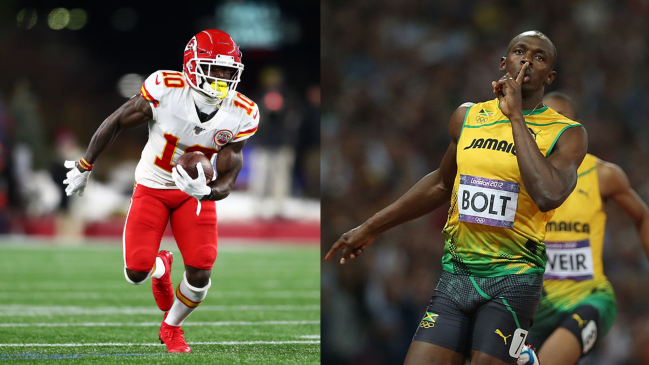 Tyreek Hill is the fastest man in football but wants to take his title to the track. The Kansas City wide receiver has been back-and-forth with the world-record holder in the 100m sprint, Usain Bolt, and the two are nearing terms on an official race.

Line up then stop hiding 🥴 https://t.co/0hxWiuZe6n

A day later, Hill doubled down on his comments and said that the 34-year-old could not beat him in a 40-yard dash, calling him “washed up.”

Bolt, who has since retired from the sport of Track & Field, did not compete at the Tokyo 2020 Olympics and welcomed the birth of his newborn twins in June. That doesn’t mean he isn’t done racing.

Joining the Dan Patrick Show on Thursday morning, Bolt said that he thinks that he can out-run Hill at any distance.

A lot of the debate between the two has been over distance. Hill talks a lot about how he is faster at 40 yards and Bolt, of course, is a 100-meter (109-yard) specialist.

During his interview with Bolt, Patrick suggested a set of conditions for a race between the two: a 70-yard dash (a compromise between 40 yards and 100 meters) with a gold medal and Super Bowl ring on the line.

Bolt said that he is in.

Here you go… Usain Bolt vs. Tyreek Hill in a 70 meter dash. @UsainBolt says he'll put up a gold medal if Tyreek puts up his Super Bowl ring. You in @cheetah? We'll set it up for the week after the Super Bowl. Let's do it! pic.twitter.com/YLY3YUq57I

It will be curious to see whether Hill puts his m̶o̶n̶e̶y̶ ring where his mouth is and accepts the terms or if Bolt will back out. Either way, the debate needs to be settled.

This whole idea stems from a Gatorade event a few years back. Hill and Bolt got into it over who could take who.