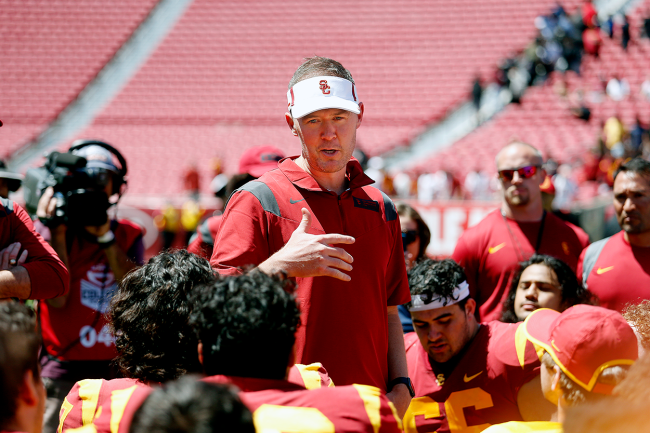 When USC football hired Lincoln Riley away from Oklahoma in November, it flipped the entire landscape of college football out West on its head. Top talent started flocking to Los Angeles through the transfer portal and the Trojans started signing some of the top recruits in the nation after years of mediocrity.

As a result of all of the movement, and the fact that NIL is playing a large factor in roster retention, recruitment and decisions to transfer across the country, there is a large target on USC’s back. The Trojans are expected to compete right away, and it is boom or bust.

Among the players who transferred to play for Riley and his new staff was Bobby Haskins, who spent his first four years at Virginia, is expected to provide a big boost to the offensive line. Literally. He stands 6-foot-7, 300 pounds.

Haskins recently spoke about the hate that the Trojans have been received over the last few months. He said that he kinda loves it.

During the conversation between Hasan and Haskins, they talked about how USC has quickly stepped into the “villain” role within college football. Especially as they continue to clean up and land top talent from the transfer portal.

Haskins said that he loves it. It gets him fired up, which is something of a warning shot to the rest of the FBS. They’re playing motivated.

While on the topic, Hasan and his co-host compared the transfer portal to capitalism, in a sense, to which Haskins joked about “the Invisible Hand.”

Here is the clip in its entirety, listen closely to the way Haskins says “oh dude”— you can just tell he feeds off of the haters:

“They hate us cause they ain’t us” ft. Bobby Haskins (left tackle) #fyp #collegefootball #usc

As Hasan captioned the clip, they hate USC because they ain’t USC.