USC Football Laughed In The Face Of The Big Ten, ACC and Pac-12 ‘Conference Alliance’ 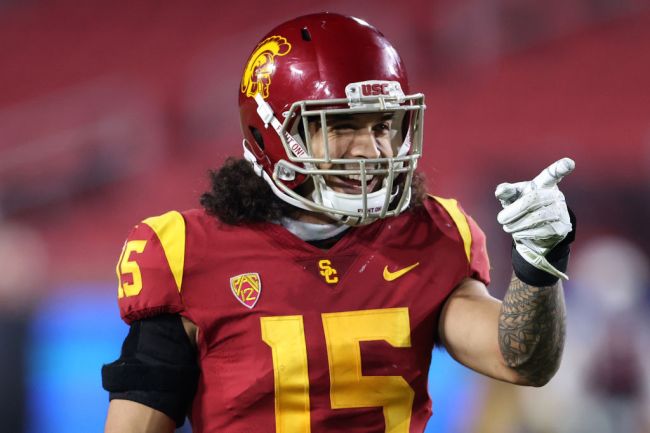 Las Vegas has seen just about everything imaginable, but it doesn’t know what’s coming when 40-50,000 rowdy cajuns arrive in purple and gold. According to Sport Illustrated’s Ross Dellenger, LSU and USC are set to meet at Allegiant Stadium on Labor Day weekend in 2024 and it’s going to be wild.

Hilariously, however, the announcement comes just one day after the ACC, Big Ten and Pac-12 announced ‘The Alliance.’ USC laughed in their faces.

One day after “The Alliance” announcement, the Pac-12’s historic football power finalizes a deal to play an SEC team on ESPN/ABC in Vegas.

The timing of this announcement, as Dellenger notes, is peculiar.

When Texas and Oklahoma announced that they would be leaving the Big 12 to join the SEC, the other conferences around the country went into panic mode. In response, the ACC, Big Ten and Pac-12 announced ‘The Alliance,’ which is essentially just an agreement to schedule more cross-conference games.

‘The Alliance’ might as well be the three left out conferences saying “we don’t need you, SEC,” even though the SEC doesn’t care. Neither does USC.

Just 24 hours after the ACC, Pac-12 and Big Ten agreed to schedule more games amongst each other, the Pac-12’s most historic program set up a game with an SEC school. It’s a brutal look for ‘The Alliance’ and completely diminishes the very little credibility it had to begin with.

But it is going to be fun.

Tiger fans are known for their dedicated fan base, traveling in mass to away games, and drinking. Combining those three factors with the bright lights and flowing taps of Sin City is a dangerous mix.

In 2019, when LSU traveled to Nashville for a game against Vanderbilt, Tiger fans drank a local bar dry of vodka by 9:00 a.m., and when they arrived to the stadium, they drank the beer supply dry by halftime. Later that year, ahead of the College Football Playoff, the team hotel bar ran out of beer bottles more than 24 hours before kickoff.

Fortunately, it’s hard to imagine Las Vegas running dry. However, if anyone could do it, it would be LSU fans. And they’re going to try their best, which is going to make for a loud, belligerent sellout at Allegiant.

The crowd split will be at least 60/40 in favor of those who made the trip from Baton Rouge and it is a game to circle on your calendar. Alliance be damned!