LOOK: Absolutely Nobody Showed Up To The USC-UCLA Rivalry Game 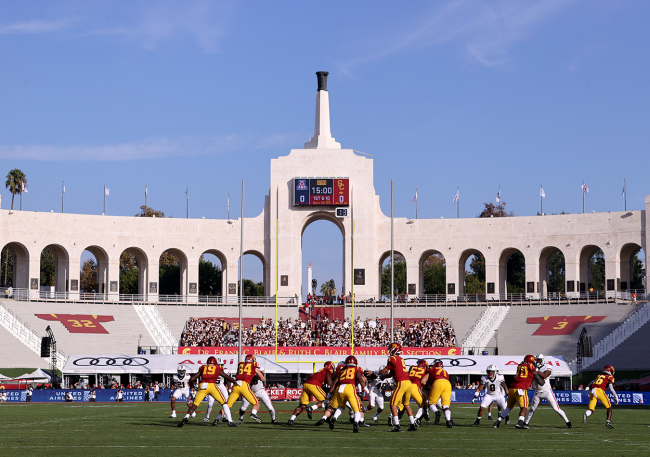 When it comes to rivalries in college football, USC and UCLA is near the top. It’s no Michigan vs. Ohio State, but it isn’t too far behind.

However, this year, the rivalry is about as flat as it can get. The Trojans fired Clay Helton just two weeks into the season and as a result, fans simply do not care about the program right now. Meanwhile, the Bruins have four losses.

The lackluster attitude toward college football in Los Angeles a problem that was exemplified on Saturday.

When USC and UCLA get together, historically, the records do not matter. Because of the hatred between the two sides, the stadium is typically — at the very least — semi-packed.

That was not the case for this year’s 2021 matchup.

USCFootball.com’s Ryan Abraham posted a photo from three minutes before kickoff and saying that the Los Angeles Memorial Coliseum was half-full would be a stretch.

To be fair, many of the Trojans fans may have been continuing the tailgate in the parking lot. Others, from either team, may have gotten caught up in Los Angeles traffic.

Those are two legitimate, potentially contributing factors to the lack of attendance. But that doesn’t mean it isn’t terrible.

Even if the crowd were to double in size as people rolled in during the first quarter, it would have been less than two thirds full. It didn’t.

Better view of the attendance at the end of the first quarter with #USC up 10-7 on #UCLA. pic.twitter.com/y2ngTlkaRq

Now, if USC beats UCLA, it will be one win away from bowl eligibility and would need to beat BYU next week. Should that happen, assuming that the Cougars are a Top-15 team, the crowd might be a little bigger.

That doesn’t take away from the terrible attendance for the cross-town rivalry. Things are not going well for the Cardinal and Gold.