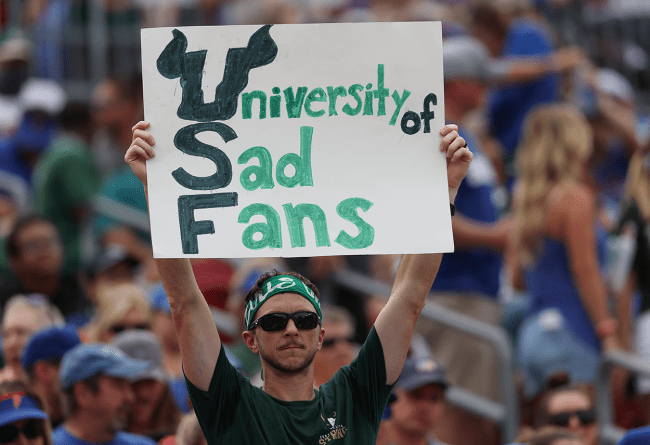 The University of South Florida has not been even remotely relevant since 2018 and has been truly abysmal ever since. The Bulls lack support, interest and excitement.

And yet, the school has decided to make it impossible to watch the team’s 2022 spring game unless you are there in the stands. Their reasoning makes absolutely zero sense.

Although there is a belief that third-year head coach Jeff Scott is going to help breathe life into the program, he has not done so in his first two years. As a result, nobody really cares about USF football because the Bulls are not winning.

It certainly does not help that the school is not doing itself any favors.

USF football will play its spring game on April 9th at Raymond James Stadium. If you are not there in person, you will not be able to watch.

The school announced that the game will not be streamed or broadcasted.

The reason for choosing not to air the spring game is not because it cannot. In fact, USF Athletics recently added a new state-of-the-art production facility within the last two years.

If you think USF has to pay extra to stream the Spring Game… from their own release on January 20, 2021:

It’s an incredible Broadcast & Video Production Center that would make it very easy for the Bulls to stream/broadcast their football team’s spring game.

But, again, that is not why the team is not doing so.

USF is not broadcasting or streaming its spring game because it does not want opponents to have access to “game tape.” No, seriously.

Jeff Scott on #USF not streaming its spring game is talking about game prep for the fall. That's the first thing they watch of Week 1 opponent, especially if there are new coordinators (like USF has). BYU will have to watch film from 2018 to try to figure out new coordinators

A two-win team from a year ago is worried about its opponents having film of what they are planning to do both offensively and defensively in 2022. Meanwhile, top Power Five programs around the country, who did not win only two games last year, are having their spring game broadcast on household cable networks.

In addition, to make their ridiculous concern even more absurd, the scrimmage is open to the public, stats will be taken and reporters will be there to report on the game. If an opposing coach was really concerned with getting film from a two-win team’s spring game, it could just walk into Raymond James Stadium and record the entire thing.

None of it makes any sense and alumni are equally as baffled as frustrated.

Boy it’s a good thing this scrimmage isn’t open to the public with plenty of people reporting on it! Or that stats won’t be taken! Secrecy is paramount!

And people with devices known as "cell phone cameras” won’t be able to record interesting plays from the game! On their honor!

Since all USF fans are located in Tampa, it’s good every single one of them is free April 9th to be on campus!

Except @smward, the only human to attend every USF Football game home & road in history. WHO LIVES IN OREGON!!

You need every single person that still gives a damn about your team on the bus. Make it easier, not harder, to be a fan. The few you have left are all we got, but not all we need.

And if a play, depth chart, alignment, or rotation is too precious to put on film, don’t do it in front of thousands who will see it anyway.

People really want to see their team. They want to get excited about the new talent you’ve brought in. Make that as easy as possible.

USF really bungled this one. It’s a pretty no-brainer decision to stream the spring game.