The USMNT Celebrated The Gold Cup By Chugging Beers From The Trophy, Partying In Vegas Despite Youthful Roster 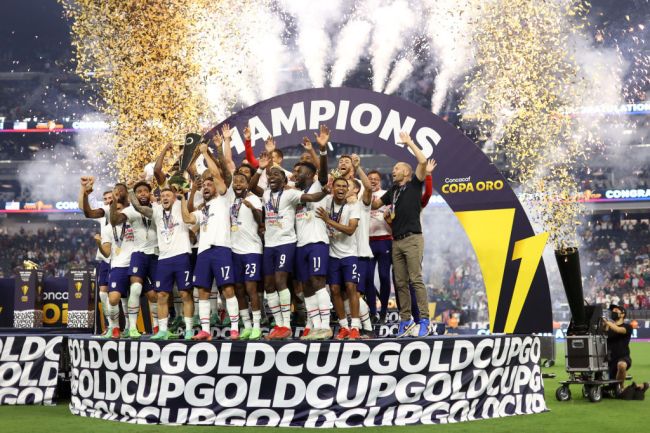 United States men’s soccer is SO back. The U.S. has won both the Nations League and the Gold Cup this year and both wins came with very different teams against a very strong Mexican side.

Coming into the Gold Cup, there were a lot of questions as to why the USMNT was not sending its best players, such as Christian Pulisic, Weston McKennie and Sergiño Dest. The roster was labeled the ‘B team’ by many and those same doubters didn’t believe that head coach Gregg Berhalter wanted to win.

To the break of dawn, yo!

After defeating Mexico for the second time in two months, the team celebrated accordingly. The team was doing slip-and-slides in the locker room and chugging beers from the tournament trophy.

Taking place in Las Vegas, the Gold Cup final played to a 1-0 result in extra time. Miles Robinson found the net in the 117th minute and broke the scoreless draw with the game winner and the roof blew off of Allegiant Stadium.

USMNT fans, who were seemingly overshadowed by or even with Mexico fans in numbers, went bonkers. So did the team on the pitch.

MILES ROBINSON IN THE 117TH MINUTE 😱

With an average age of 24 years, 236 days old, Berhalter selected the second-youngest lineup in the team’s history to start in the final. Despite their youth, the entire team hit ‘The Strip’ in Vegas to continue partying into the early hours of Monday morning.

They were filmed partying at what appears to be Drai’s Beachclub and Nightclub with the trophy in tow.

omg the USMNT is in the club too wtf is going on pic.twitter.com/a2UxTctMKG

Among those who were on stage were Gianluca Busio and George Bello. They are both only 19 years old, but I don’t want to live in a country where our national team players can’t get into a club under age after winning the top international soccer tournament in North America.

This is the United States. We beat our southernly neighbors in a game that they historically care more about. The boys deserve to party accordingly.